Nicole Stotts of Albert Lea and Cole Thompson of Glenville were married at 4 p.m. Sept. 22, 2012, at Zion Lutheran Church in Albert Lea. The Rev. Joel Vano performed the double-ring ceremony. 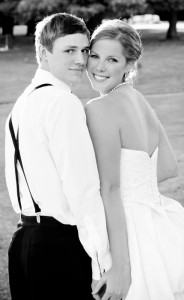 The bride attended Albert Lea High School and the University of Minnesota, Duluth. She is employed as a substitute teacher.

The groom attended Glenville-Emmons High School, University of Minnesota, Duluth, and the Brainco Minneapolis School of Advertising. He is employed at The Lacek Group.

A reception was held at Austin Country Club following the ceremony.