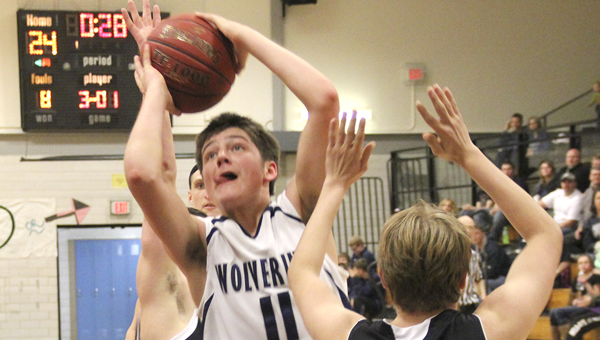 “It was anyone’s game until the end,” Alden-Conger head coach Bill Hintz said.

It was an evenly-matched contest between the two teams, as evidenced by 14 lead changes. The game began basket-for-basket, with neither team surrendering the lead for long.

Both sides traded runs as well. The Knights put up nine unanswered points in the first half to build a six-point lead, but the Wolverines regrouped with a timeout and came back to tie the game at 21.

The halftime score left Glenville-Emmons holding a three-point lead, just as it was at the end of the game.

“Give Alden credit, they were attacking the basket hard,” Matson said.

Leads were traded again before Alden-Conger went on an 8-0 run.

“We started moving the ball, just trying to get open,” Hintz said.

As the minutes ticked down, however, Glenville-Emmons’ senior guard Derek Olson completed a 3-point play, scored a layup and drained a shot from beyond the arc to extend his team’s lead. Junior guard Gavin Allison also scored a 3-pointer during that stretch for the Wolverines.

With just a few minutes left, the Wolverines led 55-47, but Alden-Conger narrowed the gap with free throws.

The Knights had one last chance to tie the game with 8.9 seconds remaining after a missed Glenville-Emmons free throw. The Knights brought the ball down the court and took a shot from underneath the hoop, but it didn’t go. Cue the buzzer.

One of the differences in the game in Hintz’s eyes were the shots from close range that his team wasn’t able to finish.

“There were a lot of them,” Hintz said.

“We just got lazy. We slowed down. We didn’t move.”

Junior guard Matt Erickson led the Knights with a double-double. He earned a 13 points and a team-high 17 rebounds.

For Glenville-Emmons, Olson had a typical game with a team-high 25 points, including five 3-pointers.

Since every team knows they need to stop Olson, Matson said, the Wolverines need to find other guys to help with scoring as well. Matson was pleased with the way Allison played. He was second on the team with 11 points.

With the win, the Wolverines are on a two-game winning streak. They have won three of the last four and are 4-13 overall this season.

“We’re hitting our stride right now,” Matson said. “The guys, they’re bringing energy every night. We started off slow, but now things are starting to click offensively and defensively, and it’s starting to show on the court.”

The Knights fell to 2-15 overall with the loss.

Both teams are back in action Friday. Glenville-Emmons hosts Lanesboro for a 7:15 p.m. tipoff in conference play. Alden-Conger will travel to Maple River for a conference game at 7:30 p.m.