Zumba participants are young at heart 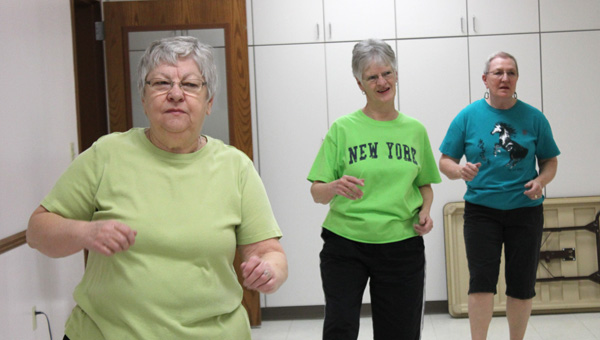 Corrine Schultz, Joyce Hansen and Sharon Johnson focus on instructor Carol Hagen as she quickly alternates from one movement to the next. --Colleen Thompson/Albert Lea Tribune

Exercising and staying fit isn’t just for the young. The Zumba Gold class proves that senior citizens can be young at heart while getting their heart rates up. 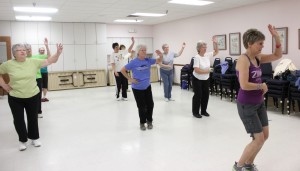 The whole group follows instructor Carol Hagen as she raises her arm and grapevine steps to the left and right. Hagen is a certified Zumba instructor and typically has 6 to 8 women that attend her class.

“You don’t really know you’re exercising,” Hagen said of the upbeat, but laid-back routine. “We’re just here to have fun.”

Zumba aims to combine elements of both aerobics and dance. It was invented in the 1990s by Alberto “Beto” Perez, a choreographer and dancer from Colombia. It became prevalent in the United States in the 2000s and now has an estimated 14 million people taking weekly classes in more than 150 countries. With many different styles and rhythms, and 500 to 1,000 calories burned in a single session, it has become a phenomenon workout for people of all ages. 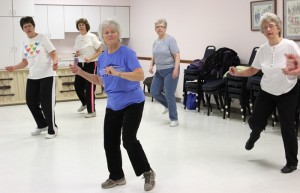 Zumba Gold is one type of Zumba and has a lower exertion level and is geared toward the older population. Hagen incorporates merengue and cumbia dance styles into the workout. She alternates between Latin, country, pop and Christmas music. The participants do several different moves, from hand claps and grapevine steps to sways. She tries to vary the songs from week to week, to keep the seniors “hopping.”

“I hear the ladies say they feel good on Mondays,” Hagen said. “They have energy to go home and get a lot of stuff done.”

“It makes us agile,” said Jan Venem, who has been attending the class since it started. “Gives us a reason to wake up and get out.”

There are usually six to eight women who attend, most of them regulars. Although all the women are retired, Hagen has had ladies anywhere from 60 to 90 years old attend.

“We haven’t had any men come yet, but we’ll see!” said Hagen with a laugh.

The women are all very close and usually get together for coffee afterwards.

“We really enjoy the social part,” Venem said. “Plus we need to cool down and get rid of the sweat before we go outside.”

The class runs every Monday from 9 to 10 a.m. at the Skyline Plaza Senior Center. Newcomers and anyone from the public are welcome to attend.