A 28-year-old Albert Lea man was charged with second-degree assault Monday for allegedly slashing another man in the hand with a knife. 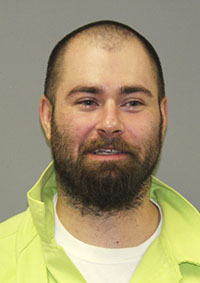 Travis Anthony Larsen reportedly attacked the 25-year-old man, an intimate partner, after the two men had been drinking and were watching a movie in an apartment at 221 E. Main St.

Court documents stated Larsen allegedly began acting like he was having a conversation with another person not present, when he became agitated and pulled a 4-inch butterfly knife out of his pocket. He reportedly slashed toward the victim, and the victim stepped back and threw up his hands in defense, sustaining a cut to the palm of his left hand.

Reports state Larsen appeared as if he was going to come after the victim a second time, so the victim reportedly backed out of the apartment and ran down the stairs.

Larsen left the apartment building with the knife in hand and walked west toward Broadway, the reports state.

Police arrested him near 338 S. Broadway, and the knife was reportedly found in his right front jacket pocket, according to reports. Both the knife and Larsen’s right hand had a substance on them that appeared to be blood.

Conditions included having no contact with the victim, not using alcohol or controlled substances, complying with random testing and signing a waver of extradition, among others.

He is scheduled to appear in court April 4.