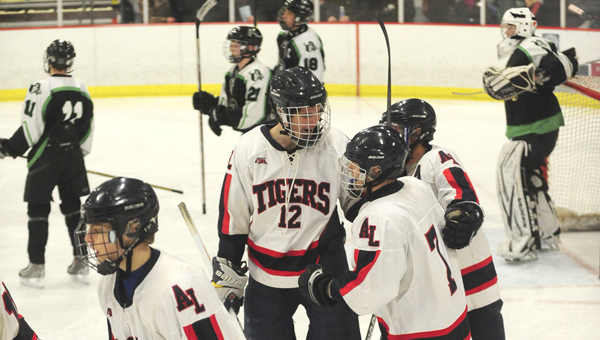 The Albert Lea boys’ hockey team clobbered La Crescent 7-1 in the first round of the Section 1A Tournament on Tuesday.

“We just put pressure on them right off the bat,” Albert Lea head coach Roy Nystrom said. “We set up a lot of plays in the offensive zone, and we weren’t in our zone very long. That helps too.” 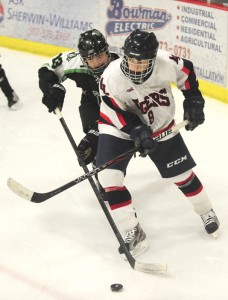 The Tigers camped out on the offensive end of the ice, out-shooting La Crescent 16-3 in the first period and 40-10 during the entire match.

Only 35 seconds into the match, Albert Lea took a 1-0 lead on a goal by senior center Adam Herbst. Senior defenseman Joshua Martin was credited with the assist.

The Tigers took a 2-0 advantage when junior defenseman Kohl Kriewall scored on a pass from sophomore wing Alex Claassen.

La Crescent cut its deficit to one goal about four minutes later.

However, Albert Lea extended its lead with another score by Herbst. A goal by senior wing Nate Stadheim gave the Tigers a 4-1 lead going into the first intermission.

In the second period, Herbst struck again, this time on a pass from junior wing Van Zelenak.

“Herbst scored three goals for us. He also got an assist,” Nystrom said. “That’s a nice evening for him.”

“It was just a team effort,” Nystrom said. “That’s the way it’s got to be the whole way.”

Albert Lea entered sectionals as the fifth seed in the section, while the Lancers were the 12th seed.

The Tigers will play at Northfield, the No. 4 seed at 7 p.m. on Thursday.

The teams met again in the Tigers’ 2012-13 season opener, the fourth match of the year for Northfield.

The Tigers had three major five-minute penalties in that match, so Northfield had an abundance of powerplay time, Nystrom said.

“We’re a lot better than we were at the beginning of the year, but they probably are too,” Nystrom said. “It’ll be interesting.”