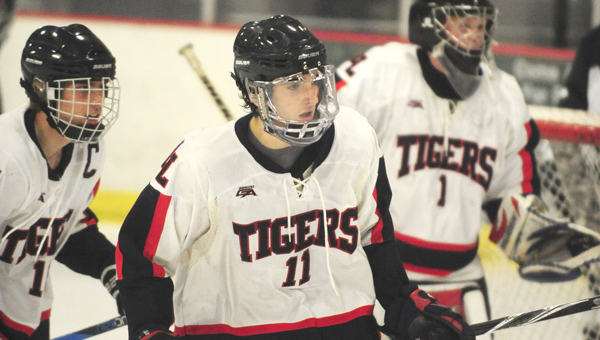 Albert Lea junior wing Van Zelenak skates over for a faceoff against Faribault, while senior center Adam Herbst provides support on defense. Sophomore goalkeeper Garret Matz gets ready in the net. Zelenak and Herbst each scored goals for the Tigers, while Matz earned 21 saves in a 5-1 Albert Lea win. -- Micah Bader/Albert Lea Tribune

The Albert Lea boys hockey team pushed its winning streak to two games with a 5-1 demolition of Faribault on Senior Night Thursday. 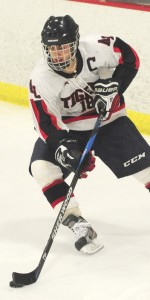 “We got off to a great start and played well,” Albert Lea head coach Roy Nystrom said. “We really skated hard in the first period.”

The Tigers out-shot the Falcons 11-3 and found the back of the net four times before the first intermission.

Only one minute and 26 seconds into the game, senior wing Nate Stadheim lit up the scoreboard with an unassisted goal.

About a minute later, junior wing Lucas Peterson gave Albert Lea a 2-0 lead. Stadheim and Dalton Flatness were credited with the assist.

Assists on the third and fourth scores were by Darik Weigel, Andrew Thompson and Zelenak.

In the second period, the Tigers extended their lead with a short-handed goal on a breakaway by senior center Adam Herbst.

Albert Lea also dominated time of possession in the second period. The Tigers doubled the Falcons’ shots on goal again. This time it was 10-5.

“They worked hard, and we killed penalties for the most part,” Nystrom said. “Offensively, we had a lot of opportunities, especially in the first and second periods.”

On the defensive side of the ice, the Tigers are still making strides.

“Defensively, we need to polish up a few things. We need to clear the puck a little quicker,” Nystrom said. “But, those things we can correct. Those are things we’ve been working on all year long, and we will continue working on them.”

In the third period, Faribault managed to score a powerplay goal, but Albert Lea maintained its four-goal lead until the final buzzer.

Sophomore goalkeeper Garret Matz saved 21 of the 22 shots on goal by Faribault.

Before the opening face-off, the seniors and their parents were honored.

The win comes after the Tigers swept the regular season series from Rochester Century on the road last weekend.