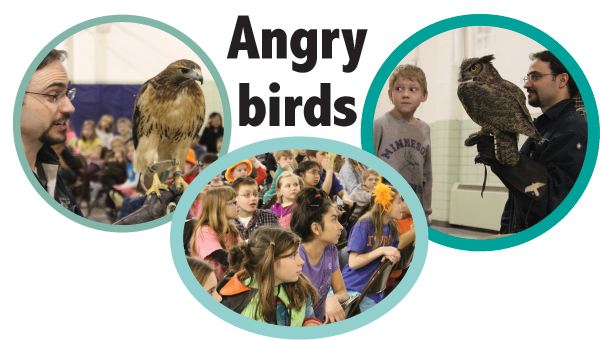 Above left: Naturalist Mike Billington of the Gabbert Raptor Center in St. Paul shows a hawk Thursday to students at St. Theodore Catholic School. Above right: Alex Olson imitates an owl. Below: Students bend their necks to follow Billington as he walks around the room. -- Tim Engstrom/Albert Lea Tribune

Forget the cheetah. The peregrine falcon is the fastest animal on the planet. It can dive at speeds approaching 200 mph.

Great horned owls don’t have horns. They have feathers that stick up and look like horns.

Sixty-seven children at St. Theodore Catholic School learned facts about four of the five types of raptors Thursday afternoon. In addition to an owl and a falcon, they saw a bald eagle and a red-tailed hawk. The four birds were from the Gabbert Raptor Center. Based in St. Paul, it is part of the University of Minnesota’s College of Veterinary Medicine.

Interpretive naturalist Mike Billington showed the birds as he explained their abilities. And he said the fifth kind of raptor is the vulture. A raptor, he told the children, has a curved beak, sharp talons and powerful feet. He said the birds he brought to the school are accustomed to being around people but indeed are wild animals. 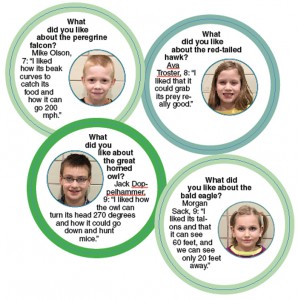 Many raptors might look big, but they weigh less than they look for the sake of flight, Billington said. A hawk, for instance, is about 3 pounds. They are nicknamed “2-by-4s” because they are about 2 feet long and have a wingspan of about 4 feet. They are often spotted from a car because they like to perch on road signs and power poles.

He said falcons have a third eyelid that is nearly clear. It allows them to dive at high speeds and see. And the holes in the beak are such that wind is slowed before the falcon breathes. Moreover, they can keep their head still despite body movement so their eyes can remain focused.

This is a trait all raptors have, Billington said. A hawk on a tree branch on a windy day instinctively can keep its head in one place despite body movement.

The feathers that poke up on a great horned owl’s head act as camouflage to break up the outline of its head. Owls are nocturnal creatures and have big eyes to aid in nighttime hunting.

Billington fed each of the birds, but feeding the owl a dead mouse grabbed the biggest reaction: Owls eat mice whole.

He said the owl will cough up a pellet 12 hours later. That pellet will be the remains of the bones and fur.

In the summer, bald eagles eat mainly fish and even other birds. Sometimes, they might eat a squirrel or a rabbit. In the winter, their source of fish is beneath ice. Billington said eagles will become scavengers and eat deer carcasses to survive. He said eagles can fly south to open water but also are able to survive winter conditions, if need be.

Female eagles generally are bigger than male eagles — this detail delighted the girls — because they need to protect the nest while male eagles go from food to nest and back over and over.

The students oohed and aahed at the four raptors but the eagle was easily the star. Each of the four birds came to the Gabbert Raptor Center as a result of an injury. The eagle was hit by a car while scavenging and had lead in her system, which likely prevented her from reacting swiftly enough to the approaching automobile. The raptor center’s veterinarians brought her back to health. Many of the birds are released into the wild but some that won’t make it in the wild end up in the educational sector, where naturalists such as Billington take them to schools.

The visit to St. Theodore Catholic School on Thursday was made arranged by Raptor Center volunteers Melissa and Cory Carroll of Albert Lea.

See a video of the birds here.