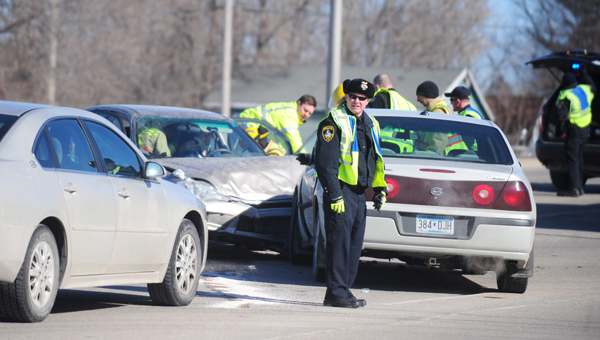 Heidi Elizabeth Rebelein was transported by ambulance to Mayo Clinic Health System in Albert Lea. The extent of her injuries is unknown.

Albert Lea Police Department Lt. J.D. Carlson said Rebelein was westbound on Main Street in a 2000 Honda Civic when her vehicle collided with the driver’s side of a 2003 Chevy Impala, driven by Elmo Donald Hedum, 86, of Albert Lea.

Hedum was reportedly stopped at a stop sign on Sibley Avenue next to the B&B Cafe, when he reportedly pulled out onto Main Street into Rebelein’s path.

Carlson said Hedum initially told police he did not see the vehicle, but later stated Rebelein had her right-turn signal on.

Traffic was limited to one lane of traffic in both the westbound and eastbound lanes of Main Street following the crash.

Carlson said no one was cited.

Hedum told police he bumped his head but was taken home by an officer.