Austin author donates money to causes both large and small 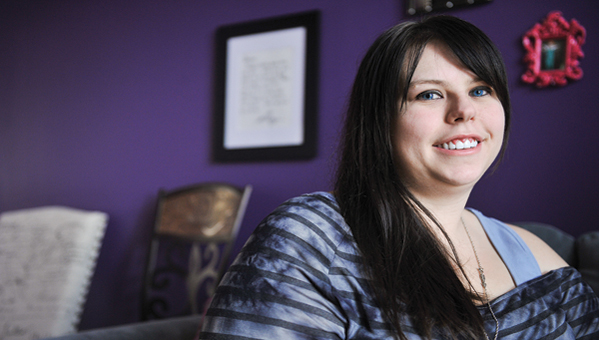 While she is known publicly for her novels, Amanda Hocking is making a mark on Austin with her charitable donations including $20,000 to the Mower County Humane Society. -- Eric Johnson

Just because Amanda Hocking’s almost done with her “Watersong” series doesn’t means she isn’t busy or can’t find time to give back to the community.

The acclaimed Austin paranormal romance author had a busy 2012, consisting of plenty of international travel, lots of interviews and a few novels here and there. Yet since she became a literary hit in early 2011, she’s always found time to donate to causes both large and small.

Take the Mower County Humane Society: Hocking gave $10,000 last year to the volunteer organization during its annual Walk for Pets. Ditto for the Austin High School’s annual Art Show, as Hocking said it was one of her favorite things about AHS. She was also the biggest donor for the Austin Inside & Out project, a photo project organized by AHS alumni that showed several local faces on the south side of AHS in 2011.

These are but a few of the organizations Hocking has given to, however.

“If I look at things that seem worthwhile, I’m going to give to them,” she said.

Her success is no secret: She sold more than 1 million e-books within a year of self-publishing her first novel, and in 2011 she signed a $2 million book deal with St. Martin’s Press for the “Watersong” series. In fact, she’s wrapping up final revisions on “Elegy,” the last in the four-book series, this spring. Since her rise in popularity, she has made sure to give back to places that mean something to her, like Blooming Prairie Public Schools. She bought an entire lab of new computers, as she attended school there until seventh grade. She also contributed money to the new swimming pool in Adams.

She hasn’t just made a local impact, however. She donated money to several California-based animal nonprofits, including North Star Rescue, which rescues and adopts out rodents. She also donated money to combat Parkinson’s disease through the Michael J. Fox Foundation. Yet she always keeps her eye out for local causes, however.

“I feel like donating locally makes a bigger impact,” she said.

Hocking is gearing up to make a big impact in 2013, as the graphic novel version of her zombie book, “Hollowland,” is set to come out at some point this year. She has several projects lined up as well, including a one-shot novel she’s outlining which she’s quite excited to work on. Above all, she’s planning on getting some serious work done.

“I’m hoping to do a lot less travel this year,” she said.