What the weather is going to be like on Saturday is on the minds of many people in and around Albert Lea.

That’s because they either are going to the Big Freeze winter festival or they have some friends or family who are going. Some of these weather watchers might be planning to jump into the icy waters of Fountain Lake. 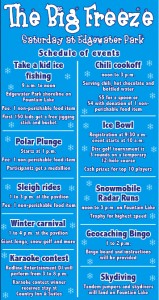 For the record, the National Weather Service predicts Saturday will be partly sunny. The agency forecasts a daytime high of 22 degrees, with a northwest wind of 5 mph becoming south in the afternoon. There might be a dusting of snow on the ground from Friday night’s scattered flurries.

In other words, not too bad. Warm enough to go outside. Cold enough to ensure good lake ice.

This is the fourth year for the Big Freeze. The first two years were at Frank Hall Park. Last year was the first the festival was at Edgewater Park. Organizers took advantage of the new 3,300-square-foot Edgewater Bay Pavilion, rather than running events from tents.

A committee of different interests meets to organize the annual festival, but the primary drive for the Big Freeze comes from the Albert Lea Convention & Visitors Bureau. It was created as a way to raise funds and food for local food shelves while bringing a tourist event for locals and out-of-towners in the middle of winter. It aims to highlight Albert Lea’s winter activities.

What’s new this year is the entertainment. Live music is out, and in its place is music and karaoke between 3 and 8 p.m. from Redline Entertainment. There will be a karaoke contest, with the winner getting a stay in a jacuzzi suite from Country Inn & Suites. Geneva Bar & Grill is providing the beverage service. It and Taco King are set to sell food.

The Freeborn County Jaycees are sponsoring a chili cookoff, in addition to sponsoring the entertainment. The cookoff begins at noon and ends 3 p.m. and takes place in the pavilion. The cost to sample the chili and vote is $5 — but it is $4 for people who bring nonperishable food items.

The Albert Lea Fire Department again is challenging people to take the polar plunge. Its cold-water rescue unit will cut an opening in the lake ice and supervise the safety of the jumpers. The cost of jumping is one non-perishable food item, but many jumpers before they go ask friends and family to give them additional food items. Participants get medallions, and the jumping begins at 1 p.m.

Nancy VanderWaerdt State Farm Insurance is sponsoring the Big Freeze Ice Bowl, a winter disc golf tournament. Participants must bring at least five nonperishable food items to enter, and they will play three rounds on a temporary 12-hole course. There are cash prizes for the top 10 finishers and some holes will feature closest-to-pin contests. This year, the course is set up in the woods near the bandshell at Edgewater Park. Registration is from 9 to 9:30 a.m., with players teeing off at 10 a.m.

For the price of — you guessed it — a nonperishable food item, kids can enjoy sleigh rides between 1 and 3 p.m. There will be a winter carnival for children between 1 and 4 p.m., sponsored by the Albert Lea Parks and Recreation Department.

People can bring their GPS devices and play geocaching bingo. Participants can sign up from 1 to 2 p.m. at Edgewater Bay Pavilion and receive a bingo board with instructions.

Also slated for Saturday — but could change depending on the weather — are skydiving and snowmobile radar runs. The skydivers registered in advance, but Big Freeze-goers can watch the skies for parachutes. The Freeborn County Snowmobile Association hopes to hold runs on Edgewater Bay from noon to 3 p.m., with a cost of $10 for three runs or $5 per run. There will be trophies for fastest run and highest speed.

A snowshoe shuffle onto the former Albert Lea Country Club property has been canceled.