Annual festival was down on food but up on dollars raised

See a video and gallery from the festival by clicking here.

The Big Freeze winter festival on Saturday didn’t raise more food than the previous year, but it did raise more funds than expected.

People attending the many events at the Edgewater Park festival donated 1,658 pounds of food, down from 1,800 pounds raised in 2012. However, nearly $1,800 was given, up from about $350, said Albert Lea Convention and Visitors Bureau Director Susie Peterson. 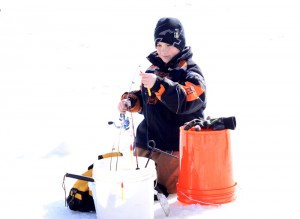 Mason Rogert, 11, of Clarks Grove, tinkers with his fishing pole Saturday during the Take A Kid fishing event on Fountain Lake. Rogert attended the event with his grandpa. –Brandi Hagen/Albert Lea Tribune

The food and funds will be split between the food shelf at the Salvation Army and the one at First Presbyterian Church, Peterson said.

This was the fourth year for the Big Freeze. The food total was more than what was raised each of the first two years, just not last year. 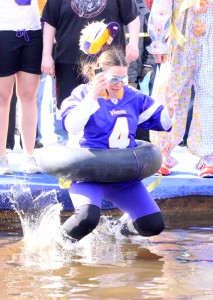 The polar plunge had 167 jumpers, Peterson said. The event was held by the Albert Lea firefighters. “Bragging rights,” as they called it, went to the Albert Lea school teachers and staff, who raised more than $800 and had 18 people jump in the cold water of Fountain Lake.

“It was a hit,” said Dawn Ware, a fourth-grade teacher at Lakeview Elementary School.

Organized as part of the district’s teacher association, Pennies for the Plunge asked students to fill jars with pennies and in exchange their teachers or school staff would leap into the icy waters at the Big Freeze.

“I was surprised at how much money came in,” Ware said. 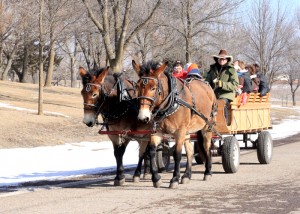 Sleigh rides were given from 1 to 3 p.m. Saturday at Edgewater Park. –Brandi Hagen/Albert Lea Tribune

She said they likely will do it again next year.

The Take a Kid Ice Fishing event had 120 participants and collected about 100 pounds of food, Peterson said.

The Big Freeze Ice Bowl, a winter disc golf tournament, had 44 participants and raised 381 pounds of food. The winner was Clay Ebertowski of Rochester, who turned 16 that very day. Albert Lea resident Buck Monson won the trophy for most food donated. One participant, a man from Mason City, fell and broke his leg. Look for scores Thursday in the Sports section.

The Albert Lea Jaycees sold 102 spoons for the chili contest and collected 60 pounds of food. First place went to Wendy Taylor, who had the first chili in the series. Second place went to Thomas Guggenberg, and third went to Kisti Skaar.

Eighty-five pounds of food were collected by the wagon rides.

There were 20 participants for the geocaching bingo.

Peterson said the weather was good but more show would have prevented the cancellation of a snowshoe shuffle, a group walk through the woods in snowshoes.

Randy Kehr, director of the Albert Lea-Freeborn County Chamber of Commerce, said he was pleased with the results of the day. It started off gray and cold but became sunny and warm. He said it seemed like there were more people than in past years, though there is no gate count to verify it. For sure, there were a record number of jumpers for the polar plunge and a record number of participants in the disc golf contest.

The Big Freeze ended sooner than in past years. It didn’t have entertainment into the evening hours this time.

Both Kehr and Peterson said there will need to be committee discussions on whether it works best as a daytime event or whether to keep the gathering going into the night.