Big top to return to Glenville 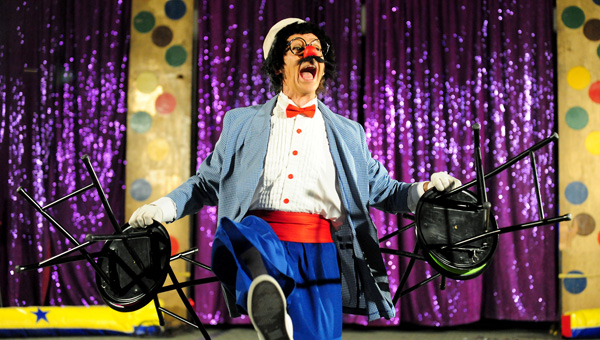 A clown laughs after removing four stools from beneath audience members during a trick during the José Cole Circus show at Glenville-Emmons High School when it visited the school in 2012. –Brandi Hagen/Albert Lea Tribune

GLENVILLE — Ladies and gentlemen, boys and girls, children of all ages: The big top is returning to Glenville.

The José Cole Circus, a show that originated in Minneapolis in 1975 and now tours Minnesota, Iowa, Wisconsin and a host of other states, comes back to Glenville-Emmons High School next month for a return performance. The circus is at 6:30 p.m. March 21 in the gym.

This will be the second year the Glenville-Emmons National Honor Society sponsors the circus, which previously was hosted by other groups, including the Boy Scouts. As part of the arrangement, local businesses will sponsor younger children so they do not need to pay the $7 ticket fee.

“We do a fundraiser for tickets for the kids that are 12 and under,” Cink said. “We’ll be starting March 1, taking those around to different organizations.”

While the circus has not yet revealed which attractions it will bring to the school, Cink said she does know there will not be an elephant at the school as there was in previous years.

The National Honor Society hopes for better weather this time around, as a stroke of back luck dampened the show last year.

“I sat here while I was teaching and looked at the Intellicast and watched the storm come in,” Cink said.

Later that day, the circus started at its designated time, and for a while continued unhindered. Then, one act before intermission, lightning struck and the power dropped out.

“The lights went out, and they never came back on,” Cink said.

The natural incident cut the show short, but Cink encourages those in attendance to give the circus a try again this year. Typically, the stands fill up and bring in more than 200 people. The circus is especially a hit among the 12 and younger bracket.

A day on a snowmobile was eye-opening