A grandmother who lives in Albert Lea and her grandson of Minot, N.D., have set a goal to collect 1 million pop tabs to benefit a Ronald McDonald House in St. Paul.

Jeannie Jackson’s grandson is Hunter Kreutzbender. He is 8 years old and was born with hydrocephalus, otherwise known as water on the brain. He has had 12 surgeries in his life, and Jackson said several of them were in the last couple of years. 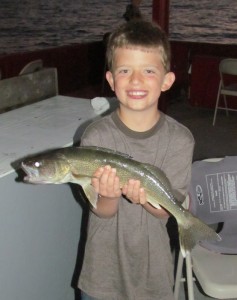 She thought with staying in medical facilities so much lately that a project would do him good. She was thinking perhaps making model airplanes or constructing with Lego blocks. So she asked Hunter.

He said he wanted to help other people and suggested recycling pop tabs for the Ronald McDonald House. She asked, how many?

“I am really determined to help him make his goal,” Jackson said.

Now the family is spreading the word that they want pop tabs, whether from households or from businesses. Jackson said setting out a pail for the tabs is a good way to get people started.

Hunter’s mother and father are Clint and Amanda Kreutzbender, both of whom are from Albert Lea and members of Grace Lutheran Church. The father is in the Air Force stationed at Minot Air Force Base, but they return to Albert Lea for holidays.

The boy visits Gillette Children’s Hospital in St. Paul for his surgeries, and the pop tabs will benefit the Ronald McDonald House near the facility. His last stay was for 28 days. He had an external shunt from his head to his stomach, and family members had to take shifts by his side to assist him anytime he needed to move, his grandmother said.

“I am hoping that people can contribute enough,” she said.