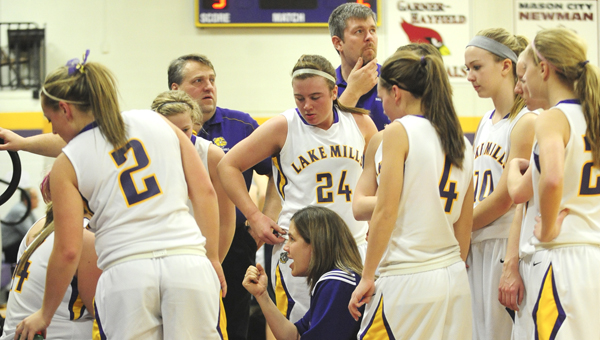 “We played a very good ballgame defensively and offensively,” Lake Mills head coach Beth Van Roekel said. “To put a game together like this, it’s huge to get us going.”

The Bulldogs built an early 16-point lead and held the Broncos to only three first-quarter points.

Despite a strong inside presence by Lake Mills senior Megan Johnson in the second quarter, Belmond-Klemme awoke to cut its deficit to nine points at the half (24-15).

In the third quarter, the Bulldogs extended their lead to double digits and caught fire from beyond the arc.

Within a two-minute span, junior guard Sarah Orban made four consecutive 3-pointers, and Johnson added a layup to give Lake Mills a 48-24 lead.

Orban said she plays the best when she doesn’t force her shots.

“I normally shoot from the outside, so if I get in a rhythm and I’m open, I’ll shoot,” Orban said. “I just need to slow down, take my time, think about my shot and shoot.”

After a field goal by sophomore Mary Evans and a pair of free throws by Orban, the Bulldogs led 53-26 at the end of the third quarter.

Lake Mills scored more points (29) in the third quarter than Belmond-Klemme had in the first three quarters combined.

“That’s probably the most points we’ve ever scored in a single quarter,” Van Roekel said.

In the fourth quarter, the reserves from Lake Mills saw some action. 10 players scored for the Bulldogs.

“She’s a great shooter,” Van Roekel said. “For her to break through at this time is great, because we need her for a run at the tournament.”

Johnson led the Bulldogs on the glass with 13 rebounds. She also scored 16 points to earn a double-double.

“Megan is one of our leaders out there,” Van Roekel said. “She’s always been comfortable driving to the basket, and she’s not afraid of contact.”

Today, the Bulldogs travel to Armstrong to play North Union at 6:30 p.m.