Chili for the chilly 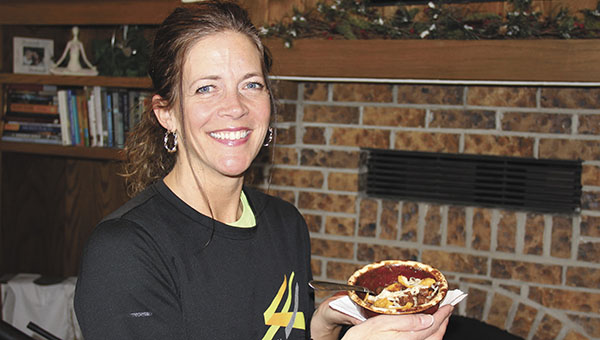 Wende Taylor’s Tex Mex Corn Chip Chili won the chili contest at the Big Freeze on Feb. 16. The chili is Taylor’s own recipe, meaty and very hot, with a topping of corn chips and grated cheese. — Kevin Coss/Albert Lea Tribune

Three years ago, Wende Taylor jumped into icy Albert Lea Lake at Frank Hall Park. While there, she took interest in another facet of the winter festival: the chili cookoff. It was the first time she had seen the event, and it got her thinking about putting her own recipe — one that holds no punches — to the test.

On Feb. 16, Taylor’s Tex Mex Corn Chip Chili won the contest at the Big Freeze, which was held at Edgewater Park. She beat out eight other recipes that included Spam, pepperoni pizza, chicken and steak. About 100 people came to sample and vote on their favorite variety at the Jaycees-hosted cookoff. 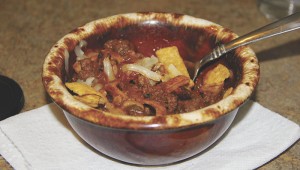 Wende Taylor’s Tex Mex Corn Chip Chili won the chili contest at the Big Freeze on Feb. 16. The chili is Taylor’s own recipe, meaty and very hot, with a topping of corn chips and grated cheese. — Kevin Coss/Albert Lea Tribune

To hone in on the flavor she was looking for, she appealed to the taste buds of her husband, Shane.

She spent time over the years refining her recipe, turning up the heat bit by bit and tweaking the ingredients in preparation for the cookoff. While the recipe is Taylor’s own creation and not a family hand-me-down, her mother made a sweeter chili quite a bit different. In contrast, the Tex Mex Corn Chip Chili is hot and meaty, with corn chips and grated cheese laid over the top.

This year’s Big Freeze wasn’t Taylor’s first shot at winning the contest. She entered last year, but ran out of chili with an hour left to go in the competition. During that time, Taylor said she may have missed out on the approval from many taste testers who couldn’t sample her recipe.

It made a difference. After six hours of cooking split between two days, she brought 20 quarts’ worth instead of 13. This time, there was plenty left over — a boon for her family, who are all chili eaters except for her 8-year-old daughter, Macy.

While she’s confident in her recipe, Taylor did have some concerns during the contest. She made a few substitutions in the ingredients she used.

“I thought maybe it was going to be too hot,” she said.

It came a little close for some taste testers, who beelined to the beverage stand after their spoonful with eyebrows raised. Others avoided it altogether.

“I didn’t want to put them through the agony if they didn’t like it,” Taylor said.

Looking ahead, Taylor said she hopes more taste testers and recipes will get involved for next year’s Big Freeze. She now considers her recipe complete, and has no big plans to change it, though she does plan to enter the contest again next year.

But her reappearance won’t be just for the sake of keeping a competitive edge. Taylor said she appreciates that the Jaycees use the funds raised to benefit local food shelves. And that the Big Freeze, which is organized by the Albert Lea Convention and Visitors Bureau with each event run by a different group, collects money and canned food for local food shelves.

But there’s the recreational aspect, too.

“It’s a fun family activity,” she said. “It helps you get through the rest of the winter.”