Coin you do it? 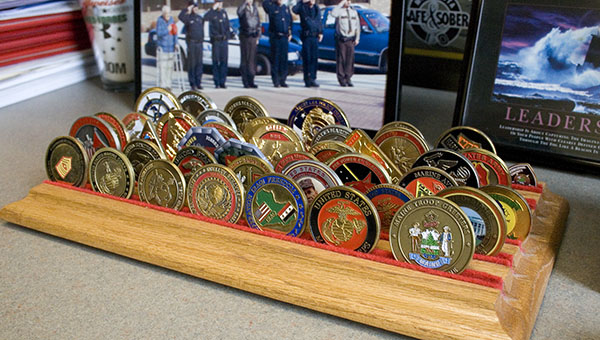 Albert Lea Police Department Lt. J.D. Carlson has collected these challenge coins over the years, mostly from his involvement in the military. — Sarah Stultz/Albert Lea Tribune

The Albert Lea Police Department and the Freeborn County Sheriff’s Office are joining in a longstanding tradition among public safety officers and members of the military.

Last spring, Albert Lea Police Department Lt. Darren Hansen started an initiative to make what are known as challenge coins for members of the department.

Hansen said challenge coins have been gaining a lot of popularity within police departments in the last five to 10 years, and he thought it would be something neat for the local officers as well.

“It boosts morale and builds unity within the department,” he said.

What are challenge coins?

Challenge coins, which are everywhere from 1 1/2 to 2 inches wide, originated in the late 1800s when the British went to war the Colony in South Africa seeking independence.

British leaders often would award soldiers for their valiant efforts with a donated sixpence coin. The coins could be spent as a bonus, but some were kept as memorabilia.

Challenge coins were adopted in the American military during World War I when a lieutenant had bronze coins made for his entire squadron featuring the squadron’s emblem. He carried his coin everywhere with him in a leather pouch around his neck.

A short while after receiving the coins, the lieutenant was forced to land his plane

behind enemy lines because of problems with his aircraft and was captured. He was stripped of his identification papers but was able to escape with the coin in the pouch around his neck.

He ultimately used it when he stumbled onto a French post to persuade the French he was an ally. They recognized the insignia on his coin and gave him time to confirm his identity.

Since then, the tradition has continued and some have even started “challenges” to make sure those who have them are carrying them with them at all times.

Hansen said he hopes the coins can be a point of unity for the Albert Lea officers in his department and that they can use them to identify with each other.

The department did not purchase the coins for the officers; instead, the officers had the option of whether to buy them themselves, along with how many they wanted to buy.

Hansen said some officers have purchased additional coins so they can trade them with officers in other departments.

Some are carrying the coins with them everywhere just like the World War I lieutenant, while others bought them simply for memorabilia, he said.

The Sheriff’s Office joined in on the coins in December, and Hansen said he helped design the coin with Sheriff Bob Kindler.

What is featured on the coins?

The Albert Lea Police Department’s challenge coins feature the department patch on one side of the coin, surrounded by the department’s founding philosophies of respect, integrity, accountability and service. On the other side is an image of the department badge with an American flag in the background.

The Freeborn County Sheriff’s Office coins feature the department patch on one side of the coin surrounded by words from the Sheriff’s Office mission statement of integrity, accountability, dedication and fairness. Parts of an American flag are also visible around the exterior of the coin.

The coins are made out of die-struck brass and have a diameter of 2 inches.

Be sure to pick up a copy of today’s print edition to see images of the actual coins. You’ll find plenty of content for Progress 2013.