The Albert Lea City Council is moving ahead on two street improvement projects scheduled for the summer.

The first project includes a 2-inch bituminous overlay on the following streets: 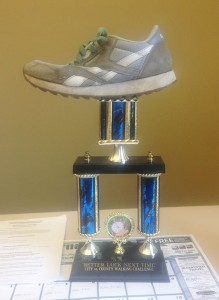 This trophy was given by Freeborn County Administrator John Kluever to Albert Lea City Manager Chad Adams on Monday night after a walking competition between employees with both entities in January. The trophy says “Better luck next time” because the city came in with less steps for its employees than the county did. –Submitted

• Channel Road from The Fairway to Lake Shore Drive

• Ridge Circle from Ridge Road to the cul-de-sac

It also calls for replacing various sections of curb and gutter that are causing drainage issues and placing bituminous on Lakeshore Drive from Robin Road to Channel Drive, where it is currently gravel.

The second project calls for a bituminous overlay and miscellaneous curb and gutter replacement on Fourth Avenue from West Ninth Street to Front Street.

It also includes sidewalk on the west side of Fourth Avenue from Front Street to Plainview Lane.

A public hearing about both projects will be March 25.

• Heard a presentation from Freeborn County Administrator John Kluever about a walking challenge between the city and county employees in January.

Kluever presented City Administrator Chad Adams with a trophy of an old sneaker mounted to the top for being the losing team. It will be displayed in Adams’ office for a year.

Aside from the friendly rivalry between the city and county, the employees also competed against employees from Byron, the Rice and Steele 911 center, Fillmore County, Wabasha County, Preston and the Southeast Service Cooperative.

In the overall competition, Freeborn County came in third place, and the city received an honorable mention.

• Accepted a revised feasibility report for the reconstruction of West Ninth Street from U.S. Highway 69 to South Broadway.

• Authorized an agreement with Allman & Associates of Rochester to provide mechanical engineering services for the remodel of the HVAC system at City Hall.