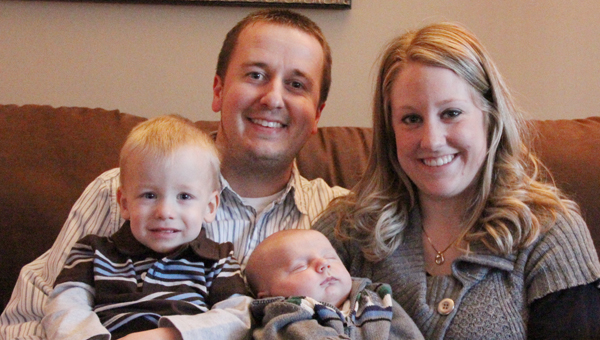 The Gooden family of Alden was recently named the 2013 March of Dimes Ambassador family for the Albert Lea and Austin area chapter. — Kelli Lageson/Albert Lea Tribune

An Alden family has been named the 2013 Ambassador Family for the local chapter of the March of Dimes.

Megan and Brady Gooden, along with sons, Luke, 2 1/2, and Owen, 8 weeks, said they’re excited to support the organization because it does so much for medical research.

“We hope March of Dimes can help others so they don’t have to go through what we did,” Megan said.

C-section in Rochester after Megan was diagnosed with preeclampsia, a serious form of high blood pressure. Then Luke spent 11 weeks in the hospital before he was able to come home.

“I was pretty emotional,” Megan said. “He was this tiny, delicate baby.”

It was 10 days after his birth before she was able to hold him, and then she spent weeks living at the Ronald McDonald House so that she could continue to be near him. Luke’s birth weight was about 2 1/2 pounds, and he was 13 inches tall. He was able to go home once he reached 5 pounds.

“We felt really helpless,” Brady said. “You really wonder if they’re ever going to have a normal life; you wonder how these tiny babies can survive.”

Now Luke is thriving, and both Megan and Brady say they feel lucky that he’s doing so well because they saw other families in the neonatal intensive care unit that were also struggling.

“We were fortunate,” Brady said.

The family has stayed busy watching Luke grow. He’s like any typical 2-year-old who can change from happy to stubborn to talkative in a minute. Luke also recently became an older brother to Owen.

In 2011, the Goodens did their first March for Babies walk, and they continue to get a team together each year to support the cause. They know it supports all kinds of families and medical research, but one kind of research it supports hit close to home. Luke had breathing problems after his birth and received surfactant therapy. March of Dimes has had a leading role in developing that therapy for premature babies.

The Goodens said they couldn’t have made it through their experience without all the support of their friends and family. Even little things like offering to mow their lawn or giving them a gift card for gas meant a lot.

“The generosity of those people was great,” Megan said. “For as small of a town Alden is, we’ve known quite a few families that have dealt with premature births, and I think that’s why the March of Dimes is so important to us.”

The local chapter of March of Dimes covers the Albert Lea and Austin areas. The Goodens will be fundraising for their team for the upcoming March for Babies Walk on April 13 in Austin. There was also a kickoff last Friday at Austin’s Riverside Arena sponsored by the Austin Bruins hockey team.