From a small town to a big city 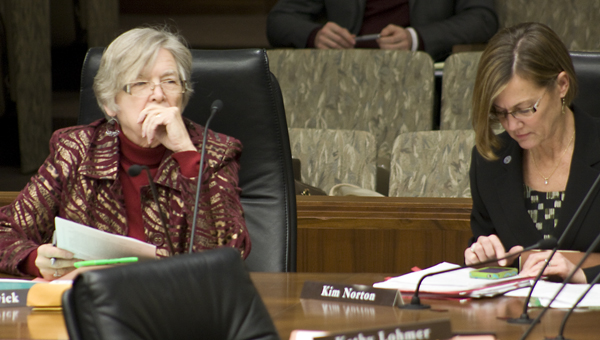 Every day, usually around 5 a.m., District 27A Rep. Shannon Savick rises out of bed.

Whether she’s at home in Wells or in her Kellogg Square studio apartment in St. Paul, she said it has become habit over the years to wake up early. 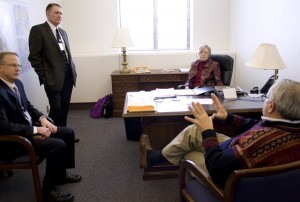 “It gives me some time to myself,” she said.

That time has become ever so valuable in her busy schedule since becoming a state representative.

Mondays through Thursdays, Savick, 72, is in St. Paul, attending committee meetings, listening to constituents and meeting on the state House floor.

She is learning her way around the State Office Building and the Minnesota Capitol.

She began as a legislator in January after defeating former District 27A Rep. Rich Murray in the November election.

At the time of the election, Savick said she had not expected to win.

Though it took her a few weeks to transition into the role, she has begun to get used to the position and its demands.

On a typical day in St. Paul, she said she likes to be in her office by at least 8 a.m. Some days she has breakfast appointments. On Wednesdays and Thursdays she attends the Labor, Workplace and Regulated Industries Committee first thing in the morning. 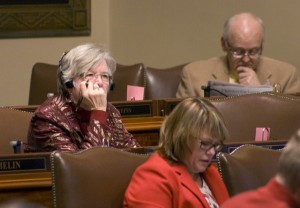 Rep. Shannon Savick of Wells listens while on the floor of the Minnesota House of Representatives Thursday. -- Sarah Stultz/Albert Lea Tribune

During the committee meetings there have already been some hot topics, including a series of gun hearings in the public safety committee and a presentation about Destination Medical Center by Mayo Clinic in the jobs committee.

At 3 p.m. on Mondays and Thursdays the house is in session. While most sessions have not lasted long, one session on Monday lasted 12 hours.

Savick said she got home at about 3 a.m., only to wake up a few hours later to begin a new day again.

Savick, who is retired from the high-tech industry, goes home on the weekend like the other legislators, where she spends time with her husband, Delmar Phipps, who is in the Parkview Care Center nursing home in Wells for extra support.

“I’m torn,” she said, of having to leave her husband during the week.

He said he relates to Savick, as they both have prior experience being the mayor of a smaller community. 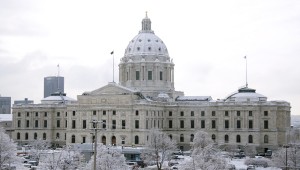 A light dusting of snow is visible at the Minnesota Capitol Thursday. -- Sarah Stultz/Albert Lea Tribune

“That kind of experience helps give you a very common sense approach to government,” McNamar said. “When there’s a problem you solve it. And you solve it with the best solution for everyone involved.”

He said Savick has worked well with other legislators thus far, and they have both worked together on public safety issues.

“She’s really gotten people on board to ensure these pieces of legislation make it through the House and help communities across the state,” he said.

What has Savick been working on?

Since taking office in January, Savick has worked on bills tied mostly to public safety and job creation.

One bill would add $5 to a person’s homeowners insurance that would go into the state’s fire safety account. The money would be used to provide training funds for firefighters, along with funds for replacing firefighters’ outer gear. In addition, it would support the state fire marshall’s office.

Savick said she is also working to implement a tax credit for volunteer first responders, including EMTs and firefighters.

She said it is getting difficult to recruit volunteer firefighters, and she hopes the tax credit will help that problem. 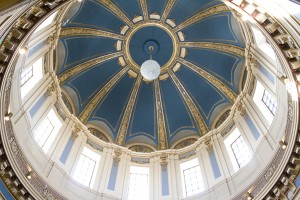 The interior of the Minnesota Capitol as seen on Thursday. -- Sarah Stultz/Albert Lea Tribune

A third firefighter bill would raise the limit on the amount of money that can go into the firefighter state retirement fund before the money has to be audited in a community.

“We should be giving them more help,” Savick said. “They’re the backbone of our communities.”

Aside from public safety, she has chief authored a bill seeking $7.5 million in funding for the dredging of Fountain Lake. A similar bill is also being sought by District 27 Sen. Dan Sparks in the Senate.

Probably her most noteworthy bill thus far, however, is the introduction of a bill that would expand the Minnesota Investment Fund by $30 million over the next two years. The fund encourages business owners to start their companies in the state.

The bill would help companies get low-interest loans through the fund to help create jobs. With new tax revenue from these companies and loan repayments, the funds are replenished and available for further job creation.

“This bill will help all Minnesota communities by encouraging companies to bring living wage jobs to our state,” Savick said. “The money is going to a program that is a proven job creator. It’s going to help Albert Lea and its surrounding communities, but also communities across the state.”

According to a news release, the Minnesota Investment Fund bill was one of the first to be introduced this session and is a top priority for the DFL-led House this session.

In the past, the fund has been receiving between $4 million and $5 million per year, but since 2005, it has received only $4 million total, the release states.

House Majority Leader Erin Murphy, DFL-St. Paul, said jobs and the economy have been a clear priority for Savick, and she knows Savick is also committed to balancing the budget responsibly.

“Shannon doesn’t approach issues from a partisan point of view, which I suspect is a function of her successful work both in business and as a small town mayor,” Murphy said.