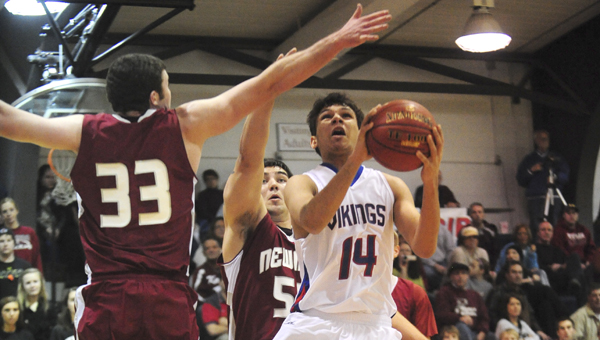 NORTHWOOD — The Northwood-Kensett boys’ basketball team fell 62-56 at home to Newman Catholic in the first round of District action on Monday.

Despite a 10-point deficit with 90 seconds left in the game, the Vikings fought until the final buzzer with energetic defense, which created turnovers and put pressure on the Knights.

Brady Cotter of Northwood-Kensett takes a shot from long range in the Vikings' first-round District matchup against Newman Catholic. Cotter made two 3-pointers in the game and finished with eight points. -- Micah Bader/Albert Lea Tribune.

“That’s one of the things I strive for as a coach,” Northwood-Kensett head coach Marty Cotter said. “I want the kids to give me 32 minutes, regardless of the score. This team is no different.”

By the end of the first quarter, the Vikings built an 11-9 lead with high-percentage shooting from the field.

“Basketball is a game of runs, and we started by shooting the ball extremely well,” Cotter said. “You know you’re going to cool off after that.”

However, the Vikings didn’t cool off right away.

Early in the second quarter, Newman Catholic took the lead, but Northwood-Kensett countered with two straight 3-pointers by senior guard Brady Cotter to tie the game at 19.

The Knights took the momentum back just before the halftime buzzer. Joey Verstegen was fouled while shooting from beyond the arc. He hit two of three free-throws to extend Newman Catholic’s advantage to four points (25-21).

In the third quarter, the Knights built their first double digit lead (31-21).

Northwood-Kensett fought back again with offensive rebounding by senior guard Brent Hagen and a 3-pointer by freshman guard Mason Olson. Olson stepped up after his brother, Garrett, went out of the game.

“My freshman point-guard, he’s been playing as well as anyone,” M. Cotter said. “He came in and hit some big shots and played really well tonight.”

The Vikings whittled their deficit down to three points (33-30). But, Newman Catholic went on an 8-3 run to close out the quarter. 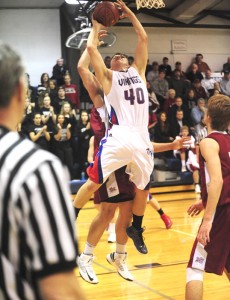 Late in the fourth quarter, Northwood-Kensett rallied within five points after G. Olson drove the length of the floor for a layup and M. Olson hit another 3-pointer.

However, Newman Catholic was able to hold on for the win.

Northwood-Kensett finished the season with an overall record of 10-12.

During the regular season, the Knights defeated the Vikings 57-49 at Mason City on Jan. 12, 2012. Brady Cotter led the Vikings with 18 points in the first meeting.