Lanesboro too much for Wolverines 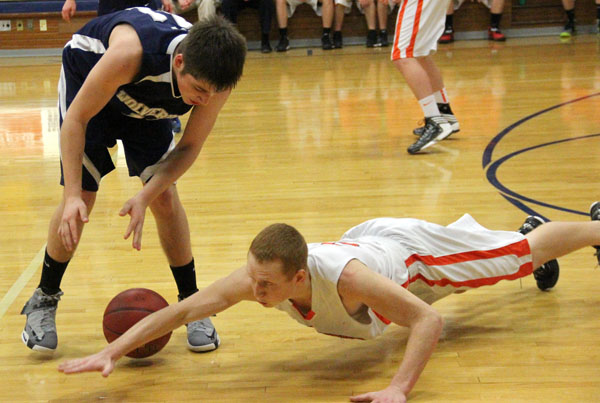 The Wolverines got behind 7-0 to start the game, and that was all the momentum Lanesboro needed to continue to build its lead all game long. Lanesboro is one of the best offensive teams in the Southeast Conference, said Glenville-Emmons coach Jared Matson, and you can’t let them come out of the gate like that if you’re the opponent.

Glenville-Emmons senior guard Derek Olson reaches up Friday for the ball to try and make a shot in the game against Lanesboro. – Heather Rule/Albert Lea Tribune

“They came out real physical,” Matson said. “The physicality on the boards. … They put a little pressure on us. That cost us.”

Not only was Lanesboro able to put up the points, it got chances by grabbing rebounds on both sides of the court. Matson said he and his team talked all week about finding the shooters for Lanesboro. It was just a matter of execution, which Matson said he was a little disappointed with.

The Wolverines trailed 40-22 at the half, but they responded right away during the second frame. They stuck with Lanesboro as the two teams traded baskets for the first few minutes.

“I was happy with the way we came out of halftime, with a little better energy,” Matson said. “We didn’t just roll over. We fought back a little bit, but in the end, I think we just ran out of gas.”

Glenville-Emmons never led in the game and just couldn’t come back from the double-digit deficits. The greatest lead of the night for Lanesboro came near the end – 29 points – after its players tallied four 3-pointers in a row. That was part of a momentum-killer for the Wolverines. Matson partly attributed the run to “defensive lapses” and players getting tired.

“Lanesboro kept firing,” Matson said. “Once they get hot, they stay hot. It’s hard to cool them off.”

Senior guard Derek Olson had another solid performance for Glenville-Emmons. He used seven 3-pointers to score 30 of the team’s points on the night. He hit two treys and a field goal to give the Wolverines their first eight points of the game.

But Olson wasn’t the only senior guard who had a good game.

Anderson had a double-double with 14 points and 10 rebounds. He scored 10 of his total points in the second half. He was also one of the players who picked up the physical part of the game, Matson said.

Glenville-Emmons fell to 4-14 overall with the loss; its winning streak halted at two games.

The Wolverines are back in action again Tuesday, for a home game at 7:15 p.m. against conference foe Schaeffer Academy. They have three home games next week, where Matson is confident the Wolverines can “defend our court.”