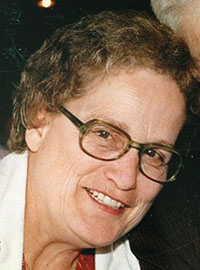 Mable was born to Zella and John Lenze in Iowa on Aug. 6, 1930. She was one of eight siblings. In 1947 she married Roy Walton and to this union was born four children, Lowell, Trudy, Neil and LaDonna.

They lived in Glenville for many years. They ran a service station in Albert Lea and then later in the ’70s one in Glenville. Mable worked side by side with Roy as the bookkeeper and parts runner and occasionally pumping gas her self. In 1996 they moved to Las Vegas to live out their retirement. Roy passed away in 2004. Mable moved to a nursing in Oklahoma in 2009.

Mable loved to sew! She made all her own clothes and many, many, many quilts over the years. She also loved to dance and grow flowers. She will be missed.

She was preceded in death by her parents, her husband, four sisters and two sons.

There will be no services. In lieu of flowers please send donations to Companion Hospice 1314 E. Oklahoma Avenue, Guthrie OK 73044.