Making the most of it 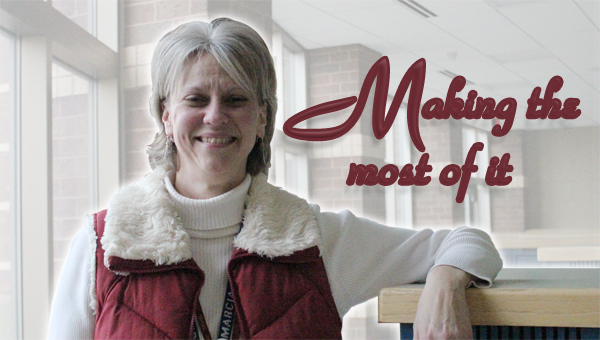 Marcia Templeman will be leaving the Albert Lea School District at the end of the school year after 25 years of teaching special education. --Kelli Lageson & Kathy Johnson/Albert Lea Tribune

A special education teacher with the Albert Lea School District is leaving after 25 years of teaching and says she’ll fondly remember her wonderful co-workers and all the students she’s been able to help.

Marcia Templeman first started in Albert Lea in 1988, after moving from Dubuque, Iowa. Now after all these years she’s moving back to her hometown area to be closer to family.

For many years Templeman taught ninth- through 12th-grade special education students, but in the last two years the program has changed following the addition of eighth-graders at Albert Lea High School. Templeman said Albert Lea is unique in that the special education program is housed in a school building, while many other districts keep the students in a completely separate building. She said there’s many benefits to having the program be in a school building.

“Most of our students have at least one outside regular education class,” Templeman said. “And most are in an advisory and are eating lunch upstairs.”

Templeman said this is important so that the special education students aren’t separated from the general population and so they can have the same opportunities. Being in the same building means walking in the same halls, eating lunch in the same area and being able to join clubs and attend events.

While some students are able to take classes in the general population, there are some who spend most of their time in the special education class. Templeman and other staff teach four core courses and three social skills courses. The small-group setting allows for more one-on-one time between staff and students.

“With the small setting we can offer more support,” Templeman said.

And there’s lots of support from the various staff members, including para educators. Templeman said paras are invaluable because they can work with the students one-on-one while the teachers work in small groups.

As an instructor Templeman has had to wear many hats. Most teachers do, but Templeman said that students in special education have even more needs. She said she’s sometimes more of a cheerleader, grandmother and mentor to the students. And figuring out what the student needs from her is sometimes half the battle.

“Every student needs you to be something different,” Templeman said. “I help them figure out what they need and we try to make it the least painful.”

There are also more programs available for the students. Templeman said there have always been students on the autism spectrum but they didn’t use to have any separate programming.

“You just didn’t hear much about it,” Templeman said.

Now, these students have special instruction available to them. Templeman insists that this doesn’t mean they’re getting easy classes and less work. Special education staff help students work through their learning disabilities.

“Accommodating a student isn’t making it easy for them,” Templeman said.

And that means her job is not always easy. She still remembers the students who dropped out or were otherwise unsuccessful and wonders what she could have done differently to help them. Often there were outside factors she couldn’t control. But what makes her job great is connecting with students and seeing them thrive. She gets excited when students show that they’re learning by asking more in-depth questions.

“A lot of what we do is also social and emotional,” Templeman said. “We spend a lot of our time talking about coping with life.”

“There will be a big hole here next year when she leaves,” Gjersvik said.

Templeman said she feels blessed to have the co-workers she’s had throughout the years. And as a parent of two Albert Lea High School graduates, she’s also benefitted from teachers and coaches who worked with her children.

“There are some amazingly dedicated, hardworking professionals here,” Templeman said.

She said she’ll miss her fellow staff when she leaves at the end of the school year, and of course she’ll miss working with students, too.

“What we’re here to do is help them get through this struggle and get them — we hope — moving in a positive direction,” Templeman said.