Man to get his long hair cut for cancer’s sake 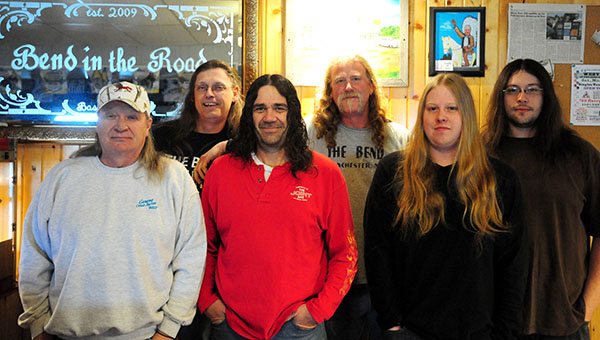 MANCHESTER — A bet that began between two friends in April 2011 is coming to an end Saturday at the Bend in the Road in Manchester. 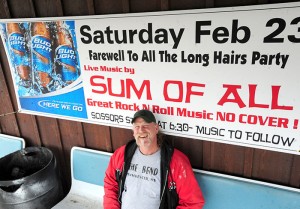 Scott “Mule” Juveland, the bar owner of The Bend in the Road in Manchester has organized an event to donate his hair to Locks of Love on Saturday. Juveland hasn’t cut his hair in 30 years. — Brandi Hagen/Albert Lea Tribune

Bar owner Scott “Mule” Juveland will cut his hair for the first time in 30 years and will donate it to Locks of Love. For his new look, Juveland is hoping bar patrons will place bids as a donation to cancer research.

“If I’m going to cut my hair after 30-plus years, we at least have to do some kind of good with it,” Juveland said.

Raising money for cancer research seemed to be the right fit for the event.

“Just over the last three months or so, I’ve known three people who have been diagnosed with cancer,” Juveland said. “Everybody knows someone who has dealt with cancer.”

Juveland, whose hair is about 15 inches long, said when he first started growing it out he was 17 years old. He wasn’t doing it to rebel; he just liked long hair.

He said his dad, Darryl, was tickled when he found out about the bet.

“He’s been hounding me for 30 years to cut my hair,” Juveland said. “He wanted to know when and where.”

Depending on the crowd and the amount of money raised, Juveland said he wouldn’t object to getting a buzz cut and sporting a Mohawk for a week. He added that for the right price, his facial hair could be up for consideration, too. 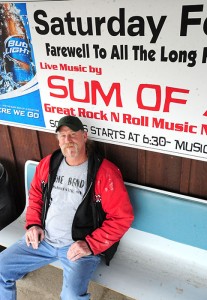 Scott “Mule” Juveland, the bar owner of The Bend in the Road in Manchester has organized an event to donate his hair to Locks of Love on Saturday. Juveland hasn’t cut his hair in 30 years. — Brandi Hagen/Albert Lea Tribune

Juveland’s mustache has only been cut off twice since he started growing one. The last time was in 1985 when he shaved it to be Dracula for Halloween.

“I’d like to raise as much money as possible, and if it takes something like that, then I’ll do it,” Juveland said. “It grows back; it’s just hair.”

The bet that led to Saturday’s event was sealed with a handshake nearly two years ago between Juveland and Doug “Snuggs” Fink. Fink, who has never had long hair, told Juveland he would grow his out if Juveland would cut his.

“I’ve known Mule more than 20 years, and I’ve never seen him with short hair,” Fink said. “He challenged me, and here we are.”

Fink, whose hair has grown out to about 13 inches in the last two years, is more than ready for it to be cut off.

“It’s too much work,” Fink said. “This is ridiculous, and my hats don’t fit anymore. Plus, it’s a for a good cause.”

There were a couple of instances where Fink gave Juveland an out to call off the bet, but because they shook on it, the bet continued.

As of Monday, four other friends have volunteered to join Juveland and Fink in making a donation.

Doug “Felt” Felt of Geneva, Troy “Wezy” DeBoer of Hollandale, Erik “Ellen” Prudoehl of Albert Lea and Matt “Daryl” Bronson of Alden will all get a new look. Between the four, there is about 66 inches of hair that could be cut.

“I think it’s cool that all the guys are stepping up and joining in,” Juveland said. “If they want to join in, it kind of takes the pressure off of me. I’m not the only one who’s going to look like a goon for a while.”

All of the men have grown their hair out for different lengths of time and reasons but are willing to donate because of the cause.

Next to Juveland, DeBoer has been growing his out the longest. He hasn’t cut his hair since 1992.

Bronson has been growing his hair out for the last seven years. The only reason he got it cut then was because his job required him to. He said he would miss his hair, but it’s for a good cause.

Prudoehl has been growing his hair out since he donated to the Geneva Cancer Auction about four years ago.

“It was such a good experience I’ve decided to do it again,” Prudoehl said.

Next to Fink, Felt has been growing his hair out the shortest period of time, but it’s because he has made two other donations to Locks of Love.

While some are ready to lose their long locks for awhile, Mule and DeBoer are hesitant.

“It’s like a milestone for Wezy and I,” Juveland said. “But I’ve always said if I was ever going to cut my hair that I would give it to Locks of Love because some little girl would love to have my hair.”

While there is no order set to who will get their hair cut first, Juveland said he will be going last.

“It’s kind of my party, and I’ll cry if want too,” Juveland joked.

Juveland said there will be probably be a lot of people that won’t recognize him after the cut, including himself, because his long hair is all they’ve ever known.

The haircuts are to begin at 6:30 p.m. and music from the band Sum of All, formerly known as Teacher’s Pet, will follow.

Unlike other nights, there will be no cover charge to see the band because Juveland wants people to donate to the cause.

Juveland also wants to welcome anyone else interested in donating their hair to join in.

“It’s not for us. It’s for the cancer patients,” Juveland said.