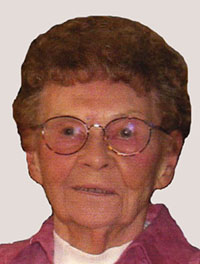 She was born Aug. 15, 1915, in Pishaville, Neb., to Charles and Hattie (Simms) Jones. She was a stay-at-home mother before she worked as a grocery store clerk at Olson’s Grocery Store in Albert Lea and Braaton’s Jewelry Store in Albert Lea. She enjoyed crocheting, puzzles, reading and collecting tea cups and saucers.

A visitation will be from 1 to 3 p.m. today at McCulloch Chapel in Moville, Iowa. Interment will be at 2 p.m. Monday at Graceland Cemetery in Albert Lea. In lieu of flowers, memorials can be given to Char-Mac of Lawton, PACE of Sioux City, or hospice of Siouxland. Christy-Smith Funeral Homes of Sioux City is helping the family with arrangements.