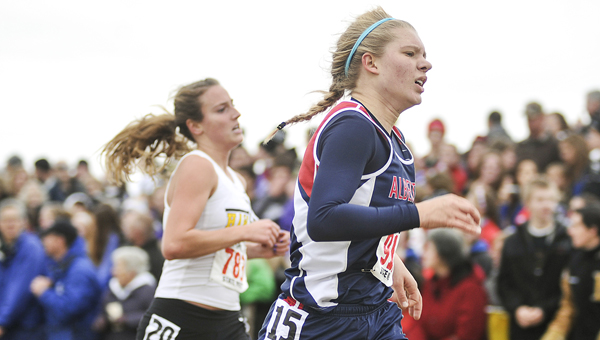 Albert Lea's Chrissy Monson runs for the finish during the Class AA girls' race of the Minnesota State Cross Country Meet at St. Olaf College in Northfield. Monson signed with the University of Northern Illinois on Wednesday. She will compete in cross country, and indoor and outdoor track. -- Eric Johnson/Albert Lea Tribune

Chrissy Monson has been bombarded with offers from over 40 Division I colleges. On Wednesday, the Albert Lea track and cross country standout signed a letter of intent to enroll at the University of Northern Illinois.

“I’m really excited to start my college career,” Chrissy said. “The whole process can be overwhelming at times, but it was really fun.”

A thick binder from all the schools that recruited Chrissy was on a desk at the signing in the entryway of Albert Lea High School. With the help of her family, she whittled her search down to five schools, she said.

In addition to a successful athletic career, Chrissy has also triumphed in the classroom. An Ivy League school even took notice.

“When Harvard recruited me, that was a really cool letter to get,” she said.

Chrissy also was given the Excel award from the Minnesota High School League on Wednesday. The award recognizes those who show leadership and volunteer in their communities. Only one boy and girl is recognized in each of Minnesota’s 16 sections.

Next, the state winners will be announced on the MSHSL website on Feb. 1.

Chrissy’s father, Maurie, and her mother, Debbie, were in attendence to show their support.

“After we visited the campus, we felt it was right for her,” Maurie said. “We’re happy and comfortable with it. It’s about five and a half hours away.”

Despite the new location, Chrissy will see a familiar face in her dorm room: Taylor Perkins from Lakeville North High School.

“We’ve been rivals since seventh grade, and she’s one of my best friends from running,” Chrissy said. “She also committed to Northern Illinois today. It’s really exciting. We spent the last three weekends together.”

Among her prep accolades, Chrissy was a track state champion in the mile, and she ran at the state cross country meet five times, Albert Lea head cross country coach Jim Haney said. She also won four Big Nine Conference cross country titles, one section title and numerous meet victories, according to an article by Rocky Hulne and Brandi Hagen.

While at Albert Lea, Chrissy also participated in basketball, choir and one-act play. In college, she will participate in cross country, and indoor and outdoor track.