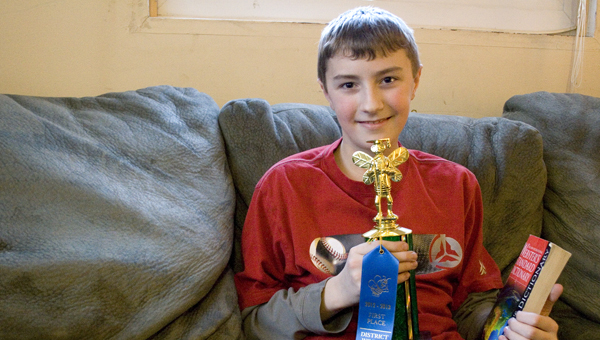 That love of reading and his knowledge of vocabulary paid off Jan. 24 as Avery became the Albert Lea School District’s spelling bee winner.

“He didn’t expect to win,” said his mother, December Moore. “It was exciting.”

Students with the highest scores on a 25-question spelling test were asked to participate. Though teachers gave them a list of words to practice — and Avery with his mother very much practiced them — not every word asked at the spelling bee was on the list.

During the event itself, students could ask the moderators for the word to be used in a sentence or could request the definition, alternate pronunciation or language of origin of the word.

After the first round, everyone who spelled a word incorrectly was asked to sit down. This happened round after round until the group of 29 students was narrowed down to seven.

Then it went from seven to two: Avery and Lakeview Elementary School fifth-grader Madeline Heinz.

Avery said moderators asked him to spell words such as amateurish, bilingual, malachite and centrifugal.

But the word on which he won was pterodactyl.

The sixth-grader said his friends didn’t believe at first that he had won, and he’s excited to move forward to the Southeast Minnesota Regional Spelling Bee next Tuesday.

Students are not given any words to practice at this level, so he is basically practicing any word he and his mom can think of, he said.

December said education has always been important to their family. She won the district spelling bee herself when she was Avery’s age.

Aside from the spelling bee, Avery is in a gifted and talented class at school and is a part of Destination Imagination and Math Masters.

He made the A Honor Roll and could read when he was in preschool, his mother said.

“I like to read because it’s not limited to reality,” he said. “It’s about anything you want to write about.”

When he is not in school, Avery said he plays on a bowling league and plays baseball in the summer.

He said he wants to be a chemical engineer or do something with computers or science when he grows up.

“He’s the smartest kid I’ve ever met,” his mother said with a smile.

“The best thing about him is he’s nice and sweet and easy to get along with,” added his grandmother, Lori Moore.
Avery Moore

Interesting fact: Avery likes to make computer games and is building a website with two games for one of his classes at school.