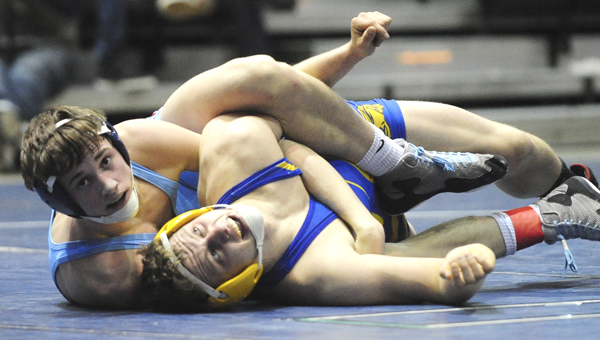 Albert Lea’s Lucas Hansen looks to the referee for points during his match in the 145-pound weight class. Hansen won with a 6-3 decision on Saturday. However, the Tigers were defeated 32-28 in the second round of sectionals. — Micah Bader/Albert Lea Tribune

ROCHESTER — The Albert Lea wrestling team concluded its season with a 32-28 loss in the second round of sectionals to a rallying Hastings squad at the Mayo Civic Center on Saturday.

“There were some matches we were supposed to win but didn’t. As a team, we just didn’t wrestle well. I don’t know what happened.” 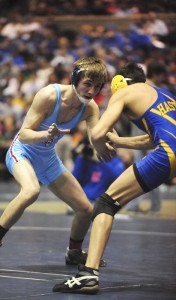 Dakota Wangsness of Albert Lea preparest to take down Jake Spitzack of Hastings in the 126-pound weight class at the Mayo Civic Center in Rochester on Saturday. Wangsness won by technical fall. — Micah Bader/Albert Lea Tribune

The No. 8 Raiders took an early 3-0 lead with a win by decision in the 106-pound weight class, but the No. 6 Tigers clawed back with three straight match wins. Trevor Westerlund of Albert Lea pinned Kyle Erickson of Hastings at 113 pounds in 32 seconds, the fastest match of the afternoon. Garrett Wangsness at 120 pounds and Dakota Wangsness at 126 pounds each earned technical falls to extend Albert Lea’s lead to 13 points (16-3).

Hastings won the next two matches to cut its deficit to six points, but Albert Lea’s Lucas Hansen won by decision (6-3) to give the Tigers a nine-point advantage.

The Raiders won the 152- and 160-pound weight classes with a major decision and decision to come within two points (19-17).

Albert Lea took the momentum back with a 3-2 decision win by Tim Christianson. Teammate Tristan Westerlund added a fall over Hastings’ Cullin Brendeland in two minutes to give the Tigers a 28-17 lead with three matches left.

Hastings earned falls in the next two weight classes to take its first lead (29-28) since the 113-pound weight class.

In the final match, Albert Lea’s Jacob Kunkel showed tremendous effort, but he fell with a 6-3 decision to give Hastings the win.

The Tigers began the season with a 12-dual winning streak. Overall, Albert Lea finished with a record of 21-3 and a team state ranking of No. 6 in Class AAA.

Although the team’s season is over, the Tigers will have a chance to participate in the individual sectional tournament on Saturday and Sunday at the Mayo Civic Center in Rochester.

“The neat thing about the sport of wrestling is that our team is done, but we still get a chance to compete as individuals,” Goodnature said. “All these kids will meet back here next weekend.”