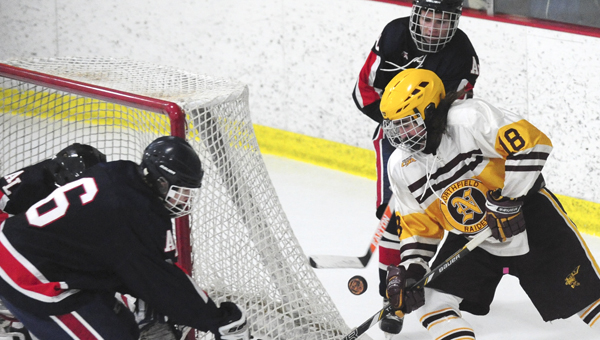 NORTHFIELD — The Albert Lea boys’ hockey team was less than four minutes away from securing a spot in the third round of the sectional playoffs, but two late goals by Northfield propelled the Raiders to a 3-2 win.

“They’ve got a strong team, but we gave them everything we had tonight,” Albert Lea head coach Roy Nystrom said. “We have nothing to hang our heads about. We played like champions.”

Despite being out-shot 10-4 in the first period, Albert Lea lit up the scoreboard first. Senior wing Nate Stadheim scored on a pass from sophmore defenseman Brady Loch. 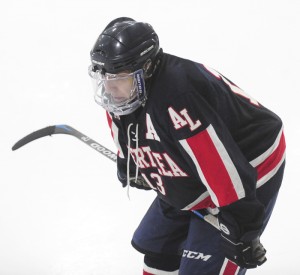 Albert Lea senior defenseman Darik Weigel skates to a face-off against Northfield in the second round of sectionals. — Micah Bader/Albert Lea

Northfield tied the match early in the second period with a goal by Alex Morsching.

With only one period left, the score was tied at one.

Albert Lea took the lead by scoring a goal with about 15 minutes left in the match. Senior wing Aspen Heilman found the net on a chain of passes from senior wing Eli Malimanek and junior defenseman Kohl Kriewall.

However, after the four minute mark, the Raiders found the net twice within a minute to take the lead.

The only period where the Tigers out-shot the Raiders was in the third period.

“It was a game of mistakes. They made some, and we made some,” Nystrom said. “Thy just happened to capitalize on one more than we did. 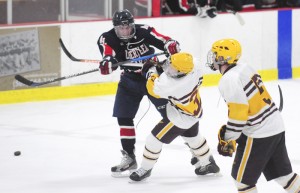 Adam Herbst, a senior center from Albert Lea, fends off a Northfield defender to get the puck into the Tigers’ offensive zone in the third period. — Micah Bader/Albert Lea Tribune

“It’s a tough loss, but we played hard.”

The Tigers showed tremendous improvement since the first time the two teams met this season. It was Northfield’s fourth game of the season and Albert Lea’s season opener. Northfield won 6-0.

Northfield improved to 17-8 overall. The Raiders received a first-round bye in the sectional tournament. The win breaks a one-game losing streak.

Northfield will play No. 1 seed Rochester Lourdes in the third round of sectionals.