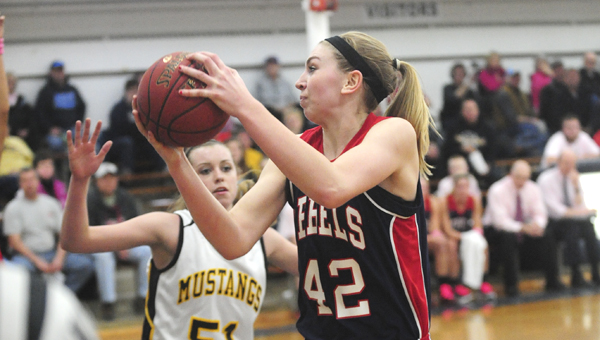 “I think some pro teams would like to shoot as well as we did tonight,” USC head coach Stu Hendrickson said. “That won’t happen every night, but it was nice to see.”

USC sophomore guard Taylor Schultz scored the game’s first points and set the tone for the night with a 3-pointer from the top of the key.

After a basket from long range by junior forward Tara Bauman and another 3-pointer by Schultz, the Rebels took an 11-2 lead.

Granada-Huntley-East Chain cut its deficit to four points (11-7) with a 5-0 run, but USC kept hitting 3-pointers to push its lead to double digits. Bauman’s second 3-pointer of the game gave the Rebels a 21-9 lead.

USC added to its lead with a steal and layup by junior guard Eryn Eilertson and a put-back by eighth-grade forward Shianne Robertson.

The Rebels took a 21-point lead on a basket by senior center Amanda Allis, after Schultz and Bauman both hit their third 3-pointers of the game.

Bauman sunk another shot from downtown just before the halftime buzzer to give USC a 25-point advantage (36-11).

United South Central junior forward Tara Bauman takes a shot from the perimeter during the second half against Granada-Huntley-East Chain on Monday. Bauman led the Rebels in scoring with 12 points, all from first-half 3-pointers. USC snapped a 10-game winning streak for the Mustangs. — Micah Bader/Albert Lea Tribune

The first half was reminiscent of Friday’s matchup against Janesville-Waldorf-Pemberton. In that game, the Rebels led 33-6 at halftime but had to hold on for a two-point win (58-56).

“We were a little tentative after what happened last week,” Hendrickson said.

In the second half, the Rebels were patient on offense and did not push the tempo.

Despite not feeling well, Bauman led USC in scoring with 12 points, all of which came in the first half. She also earned three rebounds, two assists and three steals.

“I had a headache and was feeling a little shaky, but the team played really well, and that just made me feel a lot better,” Bauman said.

Allis was a force on the interior with a team-high four blocks.

Granada-Huntley-East Chain falls to 15-7 overall, 9-5 (fourth) in the Valley Conference and 9-2 (second) in its section.

USC has won seven of its last nine games.

“We are really shooting well, and it’s a good time of the year to be doing that,” Hendrickson said. “We’ve got one game before sections, and hopefully we can keep that up.”

In the final game of the regular season, the Rebels play at Hayfield at 7:15 p.m. on Thursday.