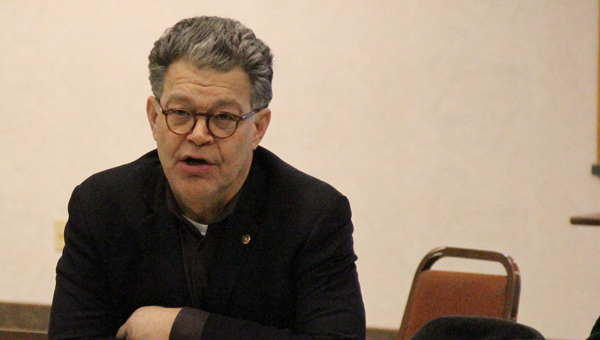 Franken discussed the Farm Bill in both Albert Lea and St. Charles Saturday, though the talks also touched on other agriculture issues like conservation, biodiesel and more. Franken said he enjoyed that other topics came up and that he enjoys speaking with constituents in informal settings.

“The reason I’m here today is to hear from you,” Franken said. “There’s very little that doesn’t impact people in rural areas.”

A group of about 20 people met at 4 p.m. at Freeborn-Mower Cooperative Services for the discussion. Franken told the group he wished the Farm Bill had been passed in the House of Representatives, because it had passed in the Senate. As it stands, a temporary extension of the Farm Bill was passed that will expire in September. He’s hopeful the House will again discuss the bill and, eventually, a five-year Farm Bill could be passed.

“There is a different feeling in Washington to me that leads me to believe the House will take it up again,” Franken said.

The senator told the group he feels farming is a national security issue, which is why it’s something he’s concerned about.

“We need people to know how to grow food,” Franken said. 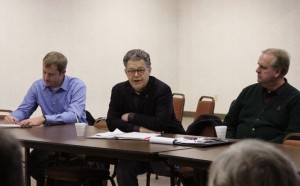 Attendants brought up several issues, including public vs. private funding for agriculture education, ethanol and conservation land. Bob Zelenka, executive director of the Minnesota Grain and Feed Association, said he came from the Twin Cities because he liked the chance to talk with Franken in a smaller setting. He said that though he and Franken politely disagree on the Conservation Reserve Program that he wanted the chance to discuss the issue more.

“There’s millions of acres that should be put into production,” Zelenka said.

Another attendee, Freeborn County Commissioner Chris Shoff, asked Franken what he thought about the future of wind production. Franken replied that climate change and Hurricane Sandy were indicators that the country needs to focus on renewable resources like wind.

“We have to be pursuing every part of our portfolio of energy,” Franken said.

Newly-elected District 27A Rep. Shannon Savick attended the discussion and said it was a good chance to learn more about farming issues so she can continue to represent all aspects of her district.

“Farmers are important to our economic foundation,” Savick said.

Prior to the roundtable discussion in Albert Lea, Franken first met with farmers and agriculture leaders in St. Charles for a similar discussion, then attended a scrimmage between robotics teams at Albert Lea’s Riverland Community College campus before touring the Bridon Cordage factory in Albert Lea.

The factory creates polypropylene twine products that serve the agriculture industry. Franken said the most interesting part of the tour was learning that the factory recycles old twine and learning that process.

But his visit to Albert Lea wasn’t all business — Franken also visited the school where he went to kindergarten that’s now Abbott Apartments. The building that’s more than a century old was formerly Abbott Elementary School, where Franken attended kindergarten and part of first grade before his family moved to St. Louis Park. Franken said he has fond memories of the school. 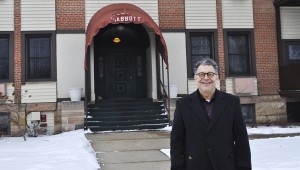 Sen. Al Franken stands in front of the former Abbott Elementary School at 913 Abbott St. in Albert Lea. He attended in Albert Lea for kindergarten and first grade. The school has since been turned into housing. --Submitted

“He was a good listener — it was a very good meeting,” Kehr said. “The people in Freeborn County, it’s important he hears what they have to say.”