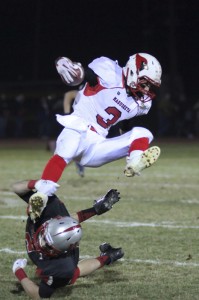 Tribune Sports Editor Micah Bader took this photo when he was sports editor for the Cedar Valley Times and Benton Eagle. The image won third place for Best Sports Photo from the Iowa Newspaper Association, competing against Iowa weeklies at the same circulation level.

He won first place in the Best Video category and third place in the Best Sports Photo category. The work submitted for the awards was done when he worked for his previous employer: the Vinton Eagle and Cedar Valley Times. He was the sports editor there.

Both of the Eagle and the Times are weekly papers based in Benton County, Iowa. For the contest, he competed against other weekly papers in his circulation division in Iowa.