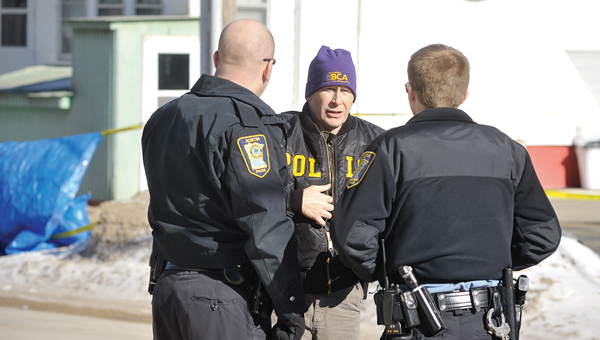 An officer with the Minnesota Bureau Criminal Apprehension talks with Austin Police officers at the scene of a suspected homicide early Friday morning in the 500 block of Fourth Street Northwest, just down from Austin and Pacelli High Schools. -- Eric Johnson/Albert Lea Tribune

AUSTIN — A 46-year-old Oakdale man killed his father Friday morning in Austin, according to several sources who weren’t authorized to speak on the record. Now, people are wondering why.

Police say a man was killed in front of an apartment near St. Augustine Church early Friday morning. When they got there, they saw a car speeding away, so they pursued it in a high-speed chase through three counties — including Freeborn County — before it crashed, killing the driver.

Sandra Byers and her children heard about the reported murder Friday, and it took them by surprise. They often saw the man, 86-year-old Dennis Seberson — who appears to be the victim — walking in the neighborhood. They knew he was a nice man who loved his granddaughter.

The red Saab that rolled near Waseca and driven by the suspect in the homicide in Austin early Friday morning is hauled into Austin Friday afternoon. -- Colby Hanson/Albert Lea Tribune

“He always worried for her,” Sandra said, whose daughter, Kimberly, knows Dennis’ granddaughter. “He was a nice, old man.”

That friend later called Kimberly and mentioned what happened, and the Byers learned the man who appears to be the suspect was Dennis’ son,

Craig Seberson, who lived in the Twin Cities.

It was saddening news for Kimberly, as she played in that apartment complex with that friend.

On Friday, a witness called 911 at 3 a.m. and reported yelling, and then saw a body in the front yard of the apartments at 510 Fourth St. NW. A police officer responded and saw a red 2001 Saab 9-3 speeding away from the scene. Multiple law enforcement agencies chased the suspect for 50 miles at speeds exceeding 130 mph. He eventually lost control of his car, rolled into a field near Waseca and was ejected. He died in the rollover. 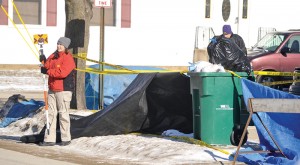 Members of the Minnesota Bureau of Criminal Apprehension work the scene in front of a home that was the site of a suspected homicide early Friday morning in the 500 block of Fourth Street NW just south of Austin and Pacelli Schools. -- Eric Johnson/Albert Lea Tribune

Sandra arrived home from third shift on Friday morning with no clue what was happening. Austin police tape blocked much of the neighborhood for the entire day. The police did not want to release names before the results of an autopsy were completed.

Dennis owned the apartment building on that block since the 1960s, according to the Mower County Auditor-Treasurer’s Office, and another neighbor mentioned that all the tenants are seemingly nice people. Others in the neighborhood, like Luke Johnson, who has lived on the other side of the block for 10 years, wondered what happened, as well. He has never heard any squabbling in the neighborhood. His daughter also played with a youngster in that apartment building.

“That’s why it was kind of shocking,” he said.

The Byers were unaware of any animosity between the two Sebersons.

Minnesota court records show Craig was convicted of felony domestic assault in 2003 and gross misdemeanor fleeing a peace officer in 2008.

Initial reports said the victim suffered head trauma, was not breathing and had no pulse when police arrived. A large tarp blocked the view of the yard throughout the day. Reports said police were looking for a gun, although authorities have not released that information.

The tenants of the apartment complex were unable to be reached for comments Friday.