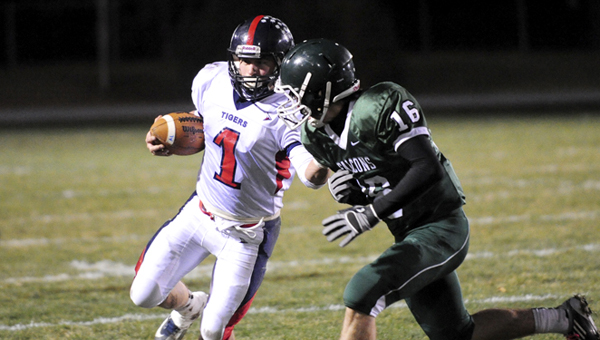 Albert Lea senior running back Ethan Abben rushes around the perimeter against Faribault this fall. Abben was selected by coaches in the Big Nine Conference to play in the Minnesota High School Football All-Star Game. — Brandi Hagen/Albert Lea Tribune

Albert Lea running back is selected to All-Star Game in St. Cloud

To describe the play of senior running back Ethan Abben, Albert Lea head football coach Max Jeffrey gave a recap of the waning moments during the Tigers’ 46-28 win over Mankato East this year.

Less than three minutes left in the game. Albert Lea led by 12. The Tigers faced a third-and-12. Jeffrey said he planned to run the ball to take time off the clock. However, Abben mentioned that he thought they could catch Mankato East off-guard with a different play: the wildcat-throwback.

“We had run the wildcat a lot that night, and Mankato East was biting,” Jeffrey said. “He convinced me to do it, and the next thing you know, we scored, and we’re up 18 points to put the game away.

“That’s the kind of heads-up player he was. He could see and understand things that we, as coaches, sometimes didn’t see.”

Abben’s intelligent play has not gone unnoticed. In addition to numerous All-Area, All-State and All-Conference awards in football and baseball throughout his high school career, Abben has been selected to play in the Minnesota High School Football All-Star Game for the south squad.

Abben was nominated by his coach, and he was selected by the coaches of the Big Nine Conference.

Abben also has more experience and knowledge of the game of football than most high school seniors.

“Ethan was probably out on the football field since he was 4 or 5 years old,” Jeffrey said. “He’d come with his dad to practice. He’s been exposed to a lot of football, and his dad coaches, so they get to talk a lot.”

Ethan’s father, Gary, is Albert Lea’s offensive coordinator, and he has been helping with the Tigers’ football program for 18 years.

Abben has been utilized in multiple positions. He transitioned from playing quarterback his freshman year to running back his sophomore year. As a junior, he moved back to quarterback, and as a senior, he found himself back at running back, where he piled up 889 yards on 155 carries, an average of 5.4 yards-per-carry.

“Playing quarterback helped me see the field better,” Abben said. “You can read the field as a running back and pick what you’re going to do on a certain play.”

“His vision was crazy-good. He could almost see things happen beforehand. Whether it was a cutback lane, avoiding a tackle or feeling pressure, he could instinctively figure those things out,” he said. “He had abilities that we hadn’t seen around here in a long time.”

In Albert Lea’s spread attack, the backfield and receiving corps. fed off each other.

“Ethan benefitted from our wideouts and skill guys because we could throw the ball to the perimeter,” Jeffrey said. “But, they benefitted from Ethan, because the defense also had to account for Ethan’s running ability. So, it worked both ways.”

Abben will be playing with a new bunch of teammates at the All-Star Game. Kickoff will be at St. Cloud State’s Husky Stadium at 1 p.m. on June 29.