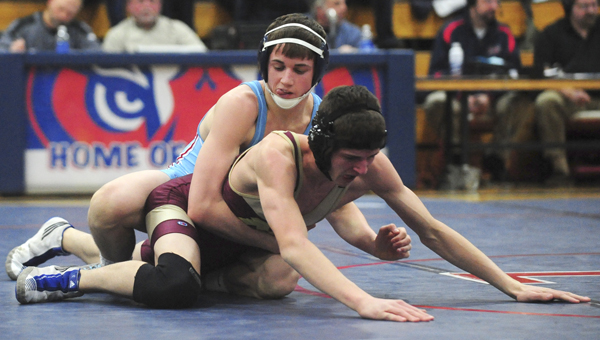 Albert Lea senior Lucas Hanson gets in position to pin Northfield's Alexander Malecha. Hanson earned a fall in the 145-pound weight class in 1 minute and 35 seconds. In the latest state polls by The Guillotine from Feb. 8, Hanson is ranked fourth in Class AAA in the 138-pound weight class. -- Micah Bader/Albert Lea Tribune

Albert Lea dominated Northfield 61-10 on Tuesday to earn a slot in the second round of the Section 1AAA Wrestling Tournament.

The dual marked the last time the seven senior Tigers will compete on the mat in the Albert Lea High School gymnasium.

The Tigers started the dual by amassing a 36-0 lead.

In the first match, Albert Lea sophomore Beau Johnsrud lit up the scoreboard 6-0 by pinning Noah Van Cleave of Northfield in 1 minute 16 seconds — the fastest fall of the night.

A forfeit by the Raiders in the 113-pound weight class gave the Tigers a 12-0 advantage. 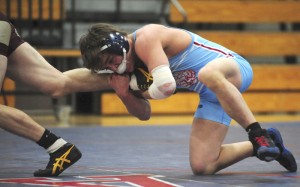 Spencer Carstens, an Albert Lea senior in the 152-pound weight class does his best to avoid letting his Northfield opponent earn an escape. The Tigers won the match 66-10. -- Micah Bader/Albert Lea Tribune

“Trevor Westerlund didn’t get a match, and he’s a senior,” Albert Lea head coach Larry Goodnature said. “As a coach, I would have liked to have seen all 14 of our kids get a match. But, we went out there and did what we needed to do to get through this first round and move on to Saturday.

Garrett and Dakota Wangsness each posted wins: Garrett earned a pin in four minutes and 26 seconds, and Dakota followed with a 4-3 decision.

“The Wangsness boys did a nice job,” Goodnature said.

Devin Nelson pinned his oppponent at 132 pounds, and Santana Acosta followed with an 11-8 decision over Tommy Matheson.

“He didn’t really do much at the beginning,” Hanson said. “So, I had to initiate the tie-ups, get my setups going and take my shots.”

“Lucas ended his career here at Albert Lea High School in nice fashion by getting that fall,” Goodnature said.

The Raiders earned one of their two wins on the night at 152 pounds.

Albert Lea’s Bany Chan fought back by pinning Northfield’s Ben Ertl in one minute and 22 seconds in the 160-pound weight class.

The Tigers won by forfeit in the final four weight classes.

“Northfield had a couple of people out, but we have a tough program, and we’ve been working hard all year,” Hanson said. “We didn’t look past them.”

“We’re excited to go to the section semifinals,” Hanson said. “Hopefully, we’ll beat Hastings and get revenge on Owatonna in the finals.”

If the Tigers advance, they will play the winner of Owatonna and Rochester Mayo at 2:30 p.m. also on Saturday.