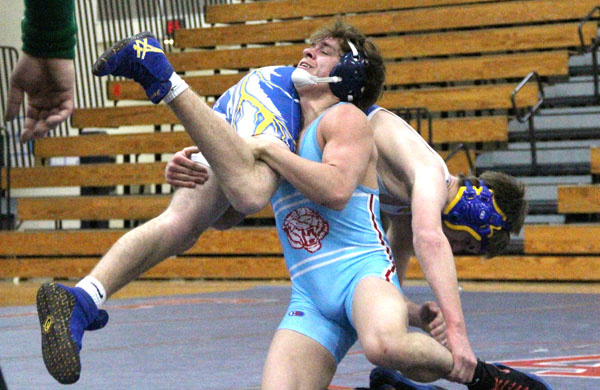 The Albert Lea wrestlers got back to their winning ways on the home mat Saturday with a 56-9 non-conference victory over Adrian (ranked No. 7 in Class AA).

“It was a good match for us,” said Albert Lea coach Larry Goodnature. “I felt all the kids wrestled very well.” 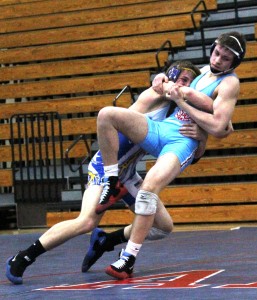 The Tigers recorded four pins, two major decisions and two forfeits in the team win. Albert Lea sophomore Beau Johnsrud lost his 106-pound match by a 4-2 decision to put Adrian in front 3-0 in team points. But the only other team points the Tigers allowed came from an Adrian pin in the 170-pound weight class.

Other than that, it was all Albert Lea.

“It’s good to come back like this after losing to Owatonna,” said senior Spencer Carstens. “Get our fire back.”

The takedowns piled up for Carstens in the 152-pound match. He was ahead 10-4 late in the third period when one of the coaches on the sidelines said, “We need one here, get a major.” Carstens must’ve heard. He recorded one final takedown with 39 seconds left in the match to give him a major decision and four points for his team.

“I just kind of had to get as many takedowns as I needed to get the major,” Carstens said.

“Spencer had a nice match for us,” Goodnature said.

Junior Bany Chan followed up Carstens’ performance with a major decision of his own in the 160-pound weight class. Both Carstens and Chan led their opponents 12-4 in points.

After getting points for a near fall in the first period of his 182-pound match, sophomore Tim Christianson looked to be on his way to a win by decision. That was until he was able to pin Adrian’s Andy McCann with less than 20 seconds left in the match.

“I focused on my shots, and I didn’t give up, and I was aggressive,” Christianson said.

Goodnature was also pleased with the match at 126 pounds, with senior Dakota Wangsness and Adrian’s Jayden Bullerman. Wangsness won by decision and didn’t allow Bullerman to score any points.

“They’ve wrestled each other before to 1-point matches,” Goodnature said. “That was a good match.” 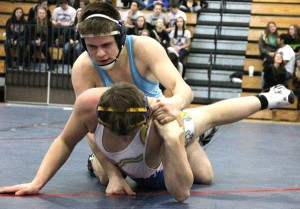 Albert Lea senior Lucas Hansen had the quickest match of the day at 138 pounds, pinning his opponent in just 25 seconds. Senior Garrett Wangsness also had a fast match at 120 pounds. He pinned Adrian’s Marshall Taylor at 1:10. Sophomore Matt Nemec took control in the third period of his 220-pound match and didn’t give up any points. He went on to win by pin at 4:46.

Albert Lea racked up two wins this week, after losing the rival match to Owatonna at home Jan. 26. The team also had some good practices this past week, according to its coach.

“We got the momentum back,” Goodnature said.

With the win, Albert Lea improved to 18-2 in dual meets this season.

The Tigers will finish off the regular season next Friday with a home match against Big 9 foe Rochester John Marshall at 7 p.m. They’ll look to do well there before hopefully meeting up with Owatonna again in the section tournament, Goodnature said.

“We need to get going into the section tournament on a winning note,” Goodnature said.