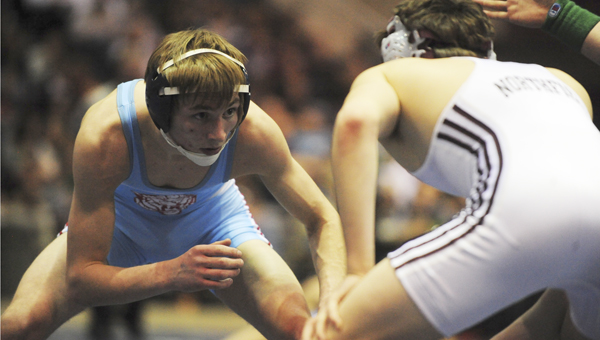 Dakota Wangsness of Albert Lea looks for a takedown in the 126-pound championship match at the Section 1AAA wrestling tournament on Saturday. Wangsness beat his first three opponents by fall, and he shut out Northfield’s Matt Metcalf 9-0 in the championship. Dakota’s twin brother, Garrett, also qualified for the state tournament by earning second place in the 120-pound weight class. — Micah Bader/Albert Lea Tribune

ROCHESTER — Albert Lea wrestlers surpassed expectations by qualifying more individuals to state than any other team in the Section 1AAA tournament at the Mayo Civic Center on Saturday.

“We expected five to make it, and getting those other two guys was a plus for us,” Albert Lea wrestling head coach Larry Goodnature said.

The pair of grapplers who were not No. 1 seeds but still found a way to secure a slot at the state tournament were Beau Johnsrud and Jacob Kunkel. 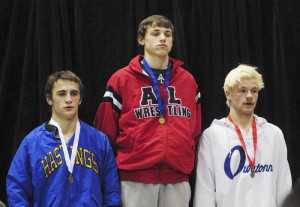 After winning the 138-pound weight class, Albert Lea’s Lucas Hansen stands with his competitors from Owatonna and Hastings. Hansen won by fall, technical fall and decision at the tournament. — Micah Bader/Albert Lea Tribune

Earlier this season, Johnsrud lost by a 5-2 decision at 106 pounds to Rochester John Marshall’s Logan Saltou. Kunkel was defeated at 285 pounds with a 2-1 decision by Rochester Century’s Luke Wilson.

Both Tigers turned the tables at sectionals. Johnsrud avenged his loss with a 5-3 decision over Saltou to qualify for the championship match.

“Beau had a heck of a tournament,” Goodnature said. “It was a great match against Saltou. He turned it around and came to wrestle.”

Kunkel bounced back from a loss in the championship match to win the battle for true second against Wilson with a 2-1 decision.

“Jacob Kunkel. Great tournament,” Goodnature said. “It’s fun to see these kids, after they get beat during the year, to turn the match around and get revenge.

“They deserve to go to the state tournament. They came through when it counted.” 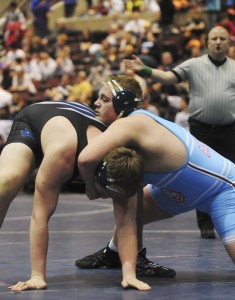 Despite falling directly on his face so hard the crowd grimaced during the 182-pound championship match, senior Triston Westerlund pinned his opponent in two minutes, 55 seconds.

“I just like going to state, Triston said. “It’s going to be fun.”

“No score in the first period. Then, I got a reversal, he got away, and in the third period, I rode him out for the win,” Hansen said. “We’re really excited to send seven to the state tournament.”

Garrett Wangsness breezed through the 120-pound bracket until a 3-1 loss by decision in the championship. However, he re-focused in the match for true second with an 11-2 major decision over Brenden Buryska of Owatonna.

The section featured three teams ranked in the final Class AAA polls by the Guillotine (No. 5 Owatonna, No. 6 Hastings and No. 7 Albert Lea), along with Rochester Mayo and Faribault in the “Lean and Mean” category.

“Over the last couple of years, the section has really strengthened up,” Goodnature said.

After getting upset in the second round during team sectionals, Albert Lea’s head coach was happy to see his wrestlers rebound.

“The kids came back after last weekend, a heartbreaking weekend,” he said. “They left it behind them and wrestled really tough. I’m really proud of the guys.”