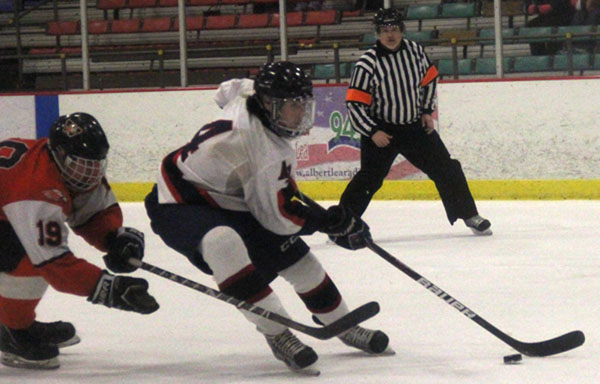 The Albert Lea boys’ hockey team skated to its second tie during the regular-season finale Thursday on home ice. The boys tied with Winona 3-3 in a Big 9 conference game.

“We had a lot of real good shots,” said coach Roy Nystrom. “It was a good hockey game. You have to take advantage of your opportunities.” 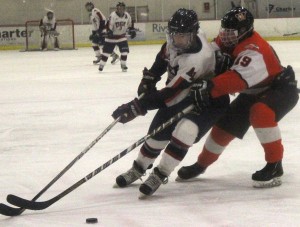 Albert Lea junior Van Zelenak skates Thursday with a Winona defender as he tries to control the puck in the offensive zone. Zelenak had a goal and an assist in the game. – Heather Rule/Albert Lea Tribune

The Tigers reached double digits in the shot column in each period of play (overtime included) except the third. The pucks just weren’t getting to the back of the net.

“It’s just one of those things,” Nystrom said.

Albert Lea senior players Adam Herbst and Darik Weigel both agreed that the Tigers came out a little slow in the first period. They scored the first goal just 1:23 into the game, but then Winona tallied two unanswered and took a 2-1 lead into the first intermission.

“We were expecting to just blow these guys out of the water because we beat them last time,” Herbst said.

The two teams faced off Jan. 8 and the Tigers came away with a 6-1 victory.

Thursday, the Tigers came back with a couple quick goals in the second period to hold a 3-2 lead for the bulk of the second. But Winona tied it at 3 apiece just 2:25 into the third period. That concluded the score sheet, despite many chances for the Tigers.

The overtime session was heavily dominated by Albert Lea as it outshot the visitors 10-2. The Tigers had a 41-35 shot advantage for the game.

“Same story though,” Herbst said. “Just can’t put the puck in the net.” 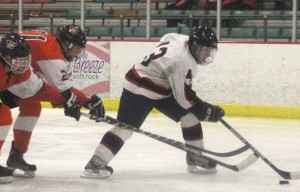 Albert Lea junior Lucas Peterson clanked the iron just a couple minutes into overtime, and junior Andrew Thompson was all alone for a chance a few minutes later.

“We had plenty of opportunities, especially in that overtime,” Weigel said.

Sophomore Alex Claassen, senior Joshua Martin and junior Van Zelenak were the goal scorers for the Tigers. Zelenak added an assist, and Herbst had two assists on the night.

With the tie, the Tigers finished the regular season with a record of 9-14-2. Next up for Albert Lea is Section 1A play, which begins Tuesday.

“Win or die, you know?” Weigel said. “Hopefully we can find another gear or two.”