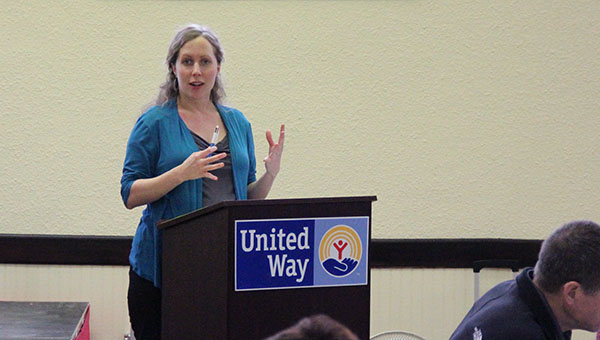 The United Way of Freeborn County had a lunch celebration Wednesday to commemorate its 2012 Live United campaign.

The organization raised just over $628,000; the goal was $660,000. The lunch celebration was a chance to recognize volunteers, agency members and anyone who helped with the campaign.

United Way Executive Director Ann Austin told the group, of about 50 people, that this year the organization has been focusing on the areas of education, income and health. The organization is also working with partner agencies and the community to make these a priority.

“We need to all have that common vision,” Austin said.

She also told the lunch attendees that the United Way wants to be accountable for bettering the community.

“We want to make sure we’re setting goals and achieving those goals regularly,” Austin said.

The lunch celebration was also a chance to recognize donors and those who helped with the campaign. In 2012, there were 2,816 donors who contributed to the campaign. A total of 387 new donors gave more than $40,000, and the average donation for any individual was $135. There were 134 Heart Club donors — or those who donate more than $500 — which totaled more than $138,000.

For the 2012 campaign there were 215 businesses that participated, with more than 2,000 people donating through workplace campaigns. That raised 84 percent of the total campaign.

The annual celebration was at the Carnegie Event Center in Albert Lea.

Other recognition was as follows:

Companies in Freeborn County that had 100 percent employee participation in the 2011 United Way campaign:

The top five companies with more than 20 percent increase:

Most increased employee campaign went to Mrs. Gerry’s Kitchen, which raised more than $17,000.

Most generous employee campaign went to Albert Lea Select Foods for its donation of more than $100,000.

New partner was Vern Eide, which raised more than $4,500.

Volunteer of the Year: Jon Murray