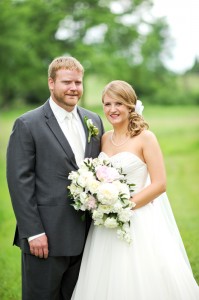 The bride’s parents are Paul and Gayle Ash of Milaca. Grandparents are the late George and Joyce Oleen and the late Roy and Marian Ash, all of Milaca.

The groom’s parents are Donald and Linda Bryson of Alden. Grandparents are William and Arlene Bryson and the late Edmund and Shirley Conn, all of Alden.

Flower girl was Nadia Young, cousin of the bride, daughter of Troy and Heidi Young of Farmington.

Ring bearers were Kobe and Brennan Young, cousins of the bride, sons of Troy and Heidi Young, of Farmington, and Dagen Jacobs, friend of the groom, son of Josh Jacobs, of Alden.

Host and hostesses were Roger and Bonnie Young, Bill and Barbara Bryson and Scott and Belinda Ash.

Guestbook attendants were Emily Lynn and Amelia and Sophie Malakowsky.

The bride is a 2004 graduate of Milaca High School and a 2009 graduate of the University of Minnesota School of Nursing. She is employed as a registered nurse in the cardiac surgery and transplant intensive care unit at Mayo Clinic in Rochester.

The groom is a 2003 graduate of Alden-Conger High School and a 2007 graduate of the University of Minnesota. He is employed as an agronomist at Five Star Co-op in Lake Mills. Erik also raises beef cattle and crops on the family farm near Alden.

Following the ceremony a reception was held at The Crown Room in Rogers.

Following the wedding, a cabin trip was taken to Pike Bay in Cass Lake.