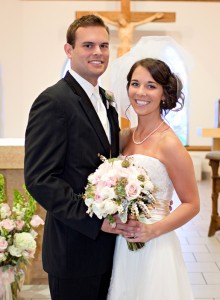 Parents of the bride are Chuck and Julie Kjos of Albert Lea. Grandmother is Fran Wilcox, of Cedar Rapids, Iowa.

Parents of the groom are Scott and Mimi Clare of Eagan. Grandparents are Dick and Peggy Palen, of St. Paul, and Al and Joanne Clare, of Traverse City, Mich.

Matron of honor was Tricia Quinlan of West St. Paul. Bridesmaids were Kelley McGinnis of Burnsville, Catherine Miller of St. Louis Park, Jessie Hersman of St. Paul, Maureen Alderman of Shakopee, Camille Clare of Omaha and Julia Clare of Eagan. The flower girl was Abby Wilcox of Des Moines, cousin of the bride.

The ring bearer was Jake Palen of Eagan, cousin of the groom.

The organist was Francie Wilcox, aunt of the bride. The vocalist was Christina Pederson.

Personal attendants were Michaela Laughrin of Edina, Brittany Van Reese of Albert Lea and Stacy Hinnenkamp of Rochester. The host and hostess was Mike and Sue Kruse, family friends. The readers were Trent Miller, friend of the bride, Dan Wilcox, godfather of the bride and Greg Palen, godfather of the groom.

The bride is a graduate of Albert Lea High School and College of St. Benedict. She is a third-year chiropractic student at the College of Chiropractic at Northwestern Health Sciences University.

The groom is a graduate of Cretin-Dermin Hall High School and St. John’s University. He is employed as a financial adviser by Northwestern Mutual in Edina.

A reception was held in the event center at Diamond Jo Casino in Northwood following the ceremony.