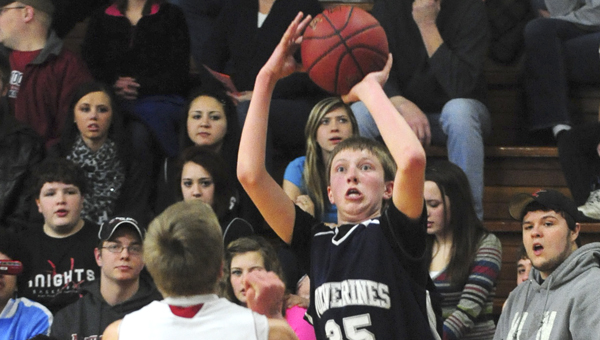 Derek Van Ryswyk of Glenville-Emmons shoots from long range against Alden-Conger in the opening round of the Section 1A basketball tournament. Van Ryswyk’s 18 points were pivotal in the Wolverines’ 55-50 victory. — Micah Bader/Albert Lea Tribune

GLENVILLE — The Glenville-Emmons boys’ basketball team defeated Alden-Conger 55-50 in a slugfest between the No. 8 and No. 9 seeds in Section 1A on Tuesday. 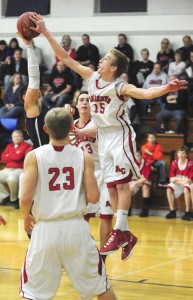 Alden-Conger’s Matt Erickson blocks a shot by Glenville-Emmons. Erickson earned a double-double with 10 points and 12 rebounds in Alden-Conger’s first-round loss.

“When we talked to our seniors before the game, we told them this was the last time they are going to play in this gym,” Glenville-Emmons head coach Jared Matson said. “They all really stepped up.”

A 3-pointer by Derek Van Ryswyk gave the Wolverines an eight-point lead, and Nick Anderson extended the advantage to double digits (10-0) with a basket in the paint.

With more than half of the first-half in the books, Alden-Conger had yet to score.

A jump shot from Dom Ofsdahl broke the dry streak for the Knights. The basket began a 19-9 run for Alden-Conger.

“We were down, and we fought back,” Alden-Conger head coach Bill Hintz said. “We’ve been down in many games, but we’ve never given up.”

In the second half, another 3-pointer by Van Ryswyk gave Glenville-Emmons’ a five-point lead. But, Alden-Conger’s Matt Erickson scored on thee straight possessions to give the Knights their first lead of the game (25-24). 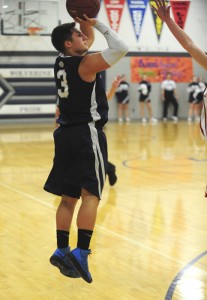 Derek Olson of Glenville-Emmons shoots a 3-pointer against Alden-Conger. Olson scored 22 points in the Wolverines’ win.

“Like I tell the guys all the time, basketball is a game of runs,” Matson said. “We’ll make a run, and we’ve got to know that they will as well.”

“Our seniors played hard,” Matson said. “Derek got a bloody nose in the second half, ran to the locker room, plugged it up with something and came right back out.”

Alden-Conger re-captured the lead shortly thereafter on a three-point play by Elijah Hallman (30-29).

Glenville-Emmons hit shots from downtown on its next two possessions to take a lead it would not relinquish.

Alden-Conger finished the season 3-21 overall, 1-9 in the Valley Conference and 1-8 in Section 1A-West. 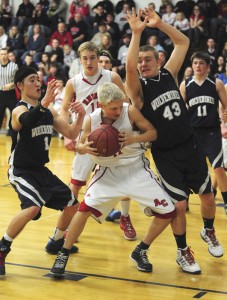 Jordan Hallman of Alden-Conger drives into the lane against Glenville-Emmons.

The Wolverines advance to play at No. 1 seed Blooming Prairie at 7 p.m. on Thursday.