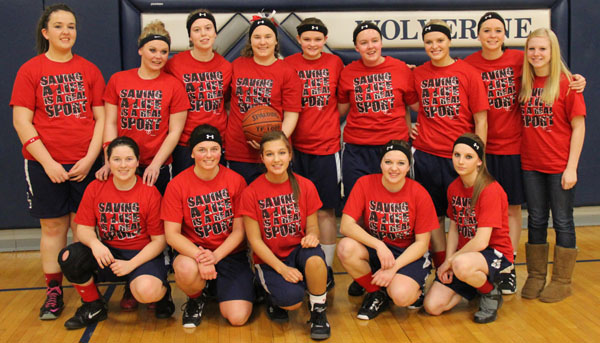 The Glenville-Emmons girls' basketball team takes a pause Friday before its game against Hope Lutheran. Their t-shirts "Saving a life is a real sport" were part of the Red Out for the American Heart Association. – Heather Rule/Albert Lea Tribune

GLENVILLE – It was a Red Out in the Glenville-Emmons High School gymnasium Friday night as both the boys’ and girls’ basketball teams were in action against conference opponent Hope Lutheran. The school showed support for heart disease awareness with red t-shirts and red paper hearts.

Though the male Wolverines were only down by 10 points at the half, successful hoops were hard to come by. They had some cold scoring droughts in the first half. 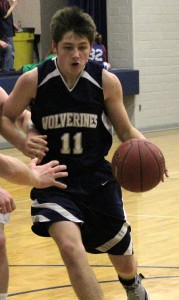 Glenville-Emmons junior Gavin Allison dribbles Friday into the lane against Hope Lutheran. The loss was the third in a row for the Wolverines. – Heather Rule/Albert Lea Tribune

“It felt like there was a lid on the basket,” said boys’ coach Jared Matson.

Shots fell a little better to start the second half, but then the scoring went cold again for the Wolverines. The players wanted to pass it too much rather than shoot, according to their coach.

Glenville-Emmons’ go-to 3-point shooter senior Derek Olson had a couple of free throws early in the first half, but that was it for him despite many attempts from beyond the arc. Matson credited Hope Lutheran with tough defense on Olson. It frustrated Olson and he just couldn’t find his shot all game long, Matson said.

Eighth-grader Derek Van Ryswyk was second in team scoring with 11 points. He drained a 3-pointer just 16 seconds into the second half, as he tried to give the team a boost. Matson was happy with his play lately in his first true stint on varsity. Senior Nick Anderson led the team in scoring with 14 points.

Matson was also happy with the play from the guys off the bench.“They held their own,” Matson said. “That’s something that’s big down the stretch.”

The girls showed some improvement from the last time they played Hope Lutheran, a 51-14 loss Jan. 11.

“So hopefully we’ll improve on that score,” girls’ coach Lisa Ziebell said before the game Friday.

They certainly did, by more than tripling their point total from that first meeting. But unfortunately for them, it just wasn’t enough for the win. 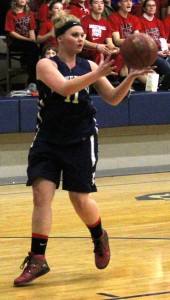 Glenville-Emmons junior Bre Lundmark accepts Friday a pass across the court from her teammate. She led the team in scoring with 12 points. – Heather Rule/Albert Lea Tribune

The Wolverines put up 14 points while there was still more than eight minutes to play in the first half. The girls looked like they would only trail at the break by 10, before Hope Lutheran hit a long 3-pointer as the final seconds ticked off, making the halftime score 35-22 in favor of the visitors.

“Some nights are really good,” Ziebell said. “We just haven’t put a complete game together. The girls are working hard. The ball never bounces our way.”

Senior Jaden Rasmusson had a good night on the stats sheet Friday. She recorded a double-double with 10 points and 13 rebounds (7 defensive, 6 offensive). She also shot 50 percent from the free-throw line at 4-for-8.

Senior Bre Lundmark led the scoring with 12 points, and junior Jaclyn Weitzel had 9 points and 7 rebounds.

Hoops aside, the night was dedicated to former Glenville-Emmons elementary principal Sue Gillard. She died last fall after having just retired in the spring. She died from heart disease, said Diana Cink, a business teacher at Glenville-Emmons.

So, the National Honor Society put together the Red Out event in support of Gillard to raise money for the American Heart Association. The NHS holds blood drives, so the students thought this event would fit well with that, Cink said. Red T-shirts (“Saving a life is a real sport”) were $10 each. They were sold during the school week and Friday evening.

All the money raised from the Red Out will be donated to the American Heart Association in Gillard’s name.

“We had $1,000 already,” Cink said, as of 10 a.m. Friday. At least a couple hundred dollars came in during the games in the evening. “So we’re thinking it’s going to be a fairly substantial donation.

“I think it’s cool. I think this school is very good about supporting causes.”

Besides the sea of red in the gym, red paper hearts hung on the walls in the school as well, each with the names of those affected by heart disease.

“If you look, there’s a lot of Ms. Gillard’s around here,” Cink said.

The boys’ team lost its third game in a row, all to conference teams, after previously having a two-game winning streak. They’re now 4-16 overall. The girls fell to 1-19 overall.

The boys’ and girls’ basketball teams for Glenville-Emmons will take on conference-foe Houston at 7:30 p.m. Monday. The boys are on the road, the girls are home.