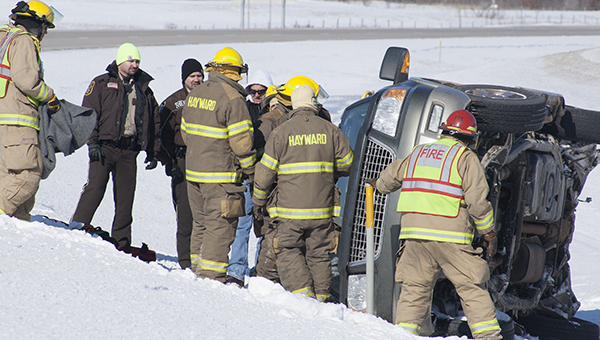 Freeborn County Sheriff’s Office deputies and firefighters with the Albert Lea and Hayward fire departments respond Tuesday morning to a car that crashed into the median on Interstate 90 about a mile west of Hayward. — Sarah Stultz/Albert Lea Tribune

A 59-year-old woman from Mesa, Ariz., received minor injuries Tuesday morning after a vehicle reportedly lost control on an icy portion of Interstate 90, left the roadway and rolled about a mile west of the Hayward exit.

Carlyn Narruhn was transported to Mayo Clinic Health System in Albert Lea for her injuries.

According to the Minnesota State Patrol, the driver of the vehicle, a 2006 Ford Expedition, was listed as Kevin Sonden, 24, of Storm Lake, Iowa.

Narruhn was a passenger, along with Sinaleen Narruhn, 26, of Storm Lake, Iowa, and Kolber Ohlet, 38, of unknown residence.

Carlyn Narruhn and Ohlet were reportedly not wearing their seat belts.

The vehicle came to rest on its passenger side in the median.

Crashes were also reported Tuesday morning on westbound I-90 between Minnesota Highway 13 and the Bridge Avenue exit.

A vehicle also reportedly spun out on eastbound I-90 between Minnesota highways 109 and 13.

The Minnesota Department of Transportation advised no unnecessary travel on Interstate 35 between Owatonna and the Iowa border because of icy roads.

“Motorists should beware of blowing and drifting snow and need to drive with extreme caution in this area,” a news release stated.

Road conditions on both I-35 and I-90 were listed as difficult, according to MnDOT.