A different kind of rehab 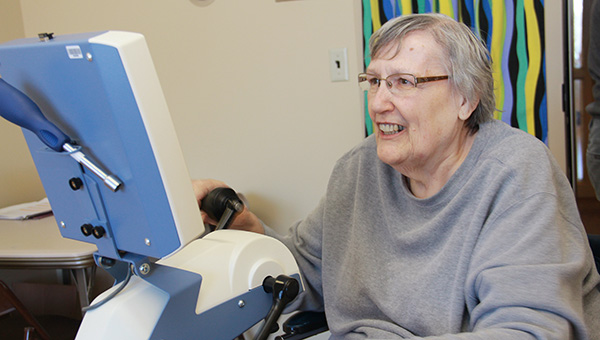 Even with snow on the ground, Ardella Skogheim picked flowers while rehabbing her knee at St. John’s Lutheran Home last week.

The exercise was a little more difficult the second time, as Skogheim had to pick the flowers before a hedgehog got them. When Skogheim was done a few St. John’s staffers commended her for how her mobility has improved and how quickly she picked the flowers.

“I had to; that old hedgehog was after them,” she said.

Skogheim wasn’t outside in a real field with a real hedgehog and flowers. She was warm and comfortable in the rehab wing of St. John’s using the OmniVR, a virtual rehabilitation system.

St. John’s added the OmniVR around last October as another way to help residents rehab injuries in a fun, unique way.

The OmniVR uses brief games to help with rehabilitation, mainly with motion, balance and mobility, but it also includes some cognitive training. 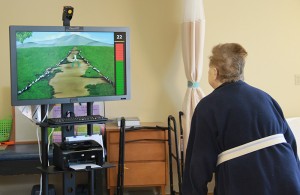 The rehabilitaion unit is similar to a Kinect gaming system and helps residents work on their rehab in a fun way. In this exercise, she moves around to pick flowers.

The system operates much like Wii Fit or the Kinect gaming system. A camera on top of a television senses the resident, and he or she controls an avatar on the screen through his or her movements.

“It gives you good exercise, that’s for sure,” Skogheim said after using the OmniVR. “I like it.”

Diane Wichmann, the St. John’s director of fund development and marketing, said the system reminds her of the Wii dance games her grandchildren use.

“It’s really fun for the residents, and it makes their exercise seem like games,” Wichmann said.

St. John’s is leasing the system, and it’s one of only five in Minnesota and one of two outside the Twin Cities. One of them is at Thorne Crest Retirement Community.

Diane Draper, a physical therapist and program director of the therapy unit, said technology like the OmniVR is playing a bigger role in rehab. She describes it as another tool in the rehab unit’s toolbox. 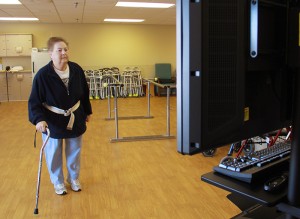 “The residents find it fun,” Draper said. “I’ve had more comments from people saying how they enjoy it. … It makes the therapy a little more fun and them a little more willing to come up and work.”

But the system is not pushing other rehab practices out the door. St. John’s still uses traditional leg strengthening exercises, balance exercises and other traditional methods.

The system can be tailored to a person’s abilities, and it can even be used by people in a wheelchair for wheelchair mobility and upper body strength.

Some of the games are similar to old folk stories. In one game, Skogheim controlled a farmer guarding sheep from a hungry wolf.

As the wolf circled to try to eat the sheep, Skogheim would have to move the farmer by walking around the rehab room to fend off the wolf.

The residents often become involved in the games, and many, like Skogheim, will talk to the game for fun.

“I just talk to him,” she said of the wolf. “Tell him to get out of my pen. Must be a hole in the fence someplace that he gets in.”

After each session, the system prints out results of how the participant performed, like how many steps were taken and proficiency, to help track their progression.

In one short round, Skogheim walked 47 feet, but she was focused more on the wolf stalking her sheep than she was her exercises.

The games, according to Draper, help keep the residents engaged. The OmniVR is a way for people to rehab without focusing on their ailments, as the games and tasks distract from the work.

JoAnne Wangen-Fink spoke of a game where her avatar has to eat grapes before a fox eats them.

“It’s very different, and it takes me away from my pains and gripes,” she said.

After breaking her leg, Wangen-Fink has been to St. John’s to rehab four times in 15 months, as her injury has flared up multiple times.

While it’s been a trying time dealing with recurring injury, Wangen-Fink praised St. John’s rehab staff and the facility.

“This place is just like home to me,” Wangen-Fink said. “And they do a very good job.”

After rehab, she plans to return home sometime in April.

Skogheim compared the technology to the Wii her grandchildren play. Draper admitted the generation using the new technology has typically only seen video games through their grandchildren, so it sometimes takes a little bit for the residents to get used to the system. And it takes a little while for some to realize they’re controlling the avatar on screen. But she said most get the hang of it with a little practice.

“The residents generally, I think, pick up on it pretty well,” she said.

Wichmann said St. John’s staff take pride in their facility and want the public to know of the new technology available there.

“We want people in Albert Lea to know we have the latest technology,” Wichmann said.

The OmniVR isn’t the only new technology being used for rehabilitation at St. John’s Lutheran Home.

St. John’s also has an Omnicycle, which is an exercise bike that can work both the arms and legs.

As a resident improves, he or she will be more productive and staff can eventually add resistance, too.

“People when they’re really weak, they might only get as low as 7 percent productivity,” said Janice Habana, a certified occupational therapy assistant. “Then like the next time they might be 17, and it’s really good at tracking things, so we can show progress.”

Last week, Jean Calderon used the machine for arm workouts, and staff bumped up her workout to include resistance.

When the resident performs well, a green smiley face appears on the screen, like it did for Calderon during a workout last week.

“I’ve got to keep that green smiley face. … That’s a motivator,” she said.

Even with the increased difficulty, Calderon still scored a 99 percent over the 10-minute workout.

The leg workouts incorporate a virtual road the rider travels down. To move around obstacles on the road, the rider will often have to pedal harder with one leg.

Printouts show how well each leg performed to help track the progress of someone who may be recovering from an injury to one leg. Once the ratings on each leg balances out, it shows the rehab progressing.