A dispatch from Daytona 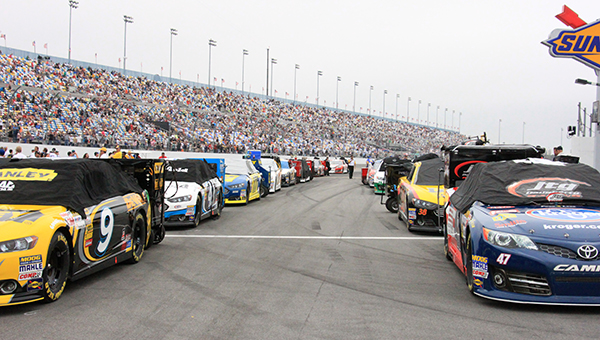 Cars are pushed onto pit road at the Daytona International Speedway before the Feb. 24 race. –Brandi Hagen/Albert Lea Tribune

Kids frequently don’t understand their parents. I’m only 23, so that still happens a lot, but I have seen the light on one particular topic.

Let me tell you about NASCAR.

Growing up, during the auto racing season, either Dad would pack up snacks and head to a buddy’s house or Mom would make snacks and Dad would host a gathering at our house.

I was all about the snacks and socializing, not so much about the racing. I just didn’t understand. Who the heck wants to watch 43 cars drive hundreds of miles for hours on end? 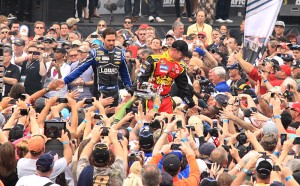 Drivers Jimmie Johnson, left, and Clint Bowyer high-five fans as they make their entrance onto the track Feb. 24 at the start of the Daytona 500. Johnson was the winner of the race. –Brandi Hagen/Albert Lea Tribun

The only interesting part, I thought, was if there was a crash, but of course it became even more boring if that happened because the cars that looked as though they were flying at the speed of a turtle on the TV had to slow it down even more while debris and wrecked cars were cleared from the track.

Crashes were what I liked. Until about a week ago, I had a much greater appreciation for demolition derbies than I did for races. 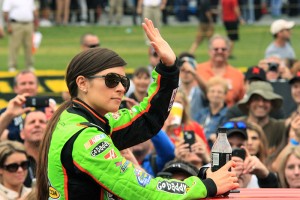 Danica Patrick is the first woman to win the pole at a Sprint Cup race. Patrick finished eighth in the Daytona 500. –Brandi Hagen/Albert Lea Tribune

Now comes the part where I see the light at the end of the tunnel in regard to the widespread love of NASCAR that my father shared.

I had a once-in-a-lifetime opportunity two Sundays ago to experience what NASCAR is really like, and not just any race — the Daytona 500.

My boyfriend, Nick, another couple and I went to the Daytona 500 in Daytona Beach, Fla. Let me tell you, my view on NASCAR has completely changed. Insert Dad’s “I told you so” comment here.

All week long, rain threatened the race, and we were pretty nervous that we weren’t going to get to see it because as much as I wish we lived in Daytona, we don’t, and we had to start driving back to the real world in Minnesota Monday morning so we wouldn’t have been able to watch a postponed race.

We stayed at a hotel a couple of miles away from the track, so we decided to walk instead of drive. I’m not one of those people who like to go walking first thing in the morning, but we figured we could save on parking fees that way. It’s a good idea we did what we did.

We left the hotel at 9 a.m. with four hours to go until the race was scheduled to start and cars were backed up at least four miles from the entrance waiting to get in. I guess that’s what happens when a quarter million people attend something. The businesses lined up across the street from the speedway were more than happy to allow people to park, but it cost a pretty penny and the prices increased as race day came closer. One place we walked by on race day was advertising a steep $80 to park in its lot. And I thought $5 event parking around home was spendy! 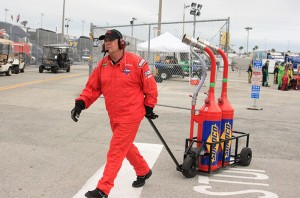 Two 11-gallon gas cans are transported between the driver’s pits and the fenced in area where they are refilled. –Brandi Hagen/Albert Lea Tribune

Once we were inside the gates, time flew by. Fans were allowed onto the track before the race started to watch the opening ceremony. People were packed into the space like sardines, and, yet, the stands still looked full. I had to laugh a little at the Sprint Cup logo in a grassy part of the track. It seemed like it had more security around it than the president.

Shortly before the race started, the drivers were brought out and the national anthem was sung. A show was made of it with fireworks shooting off as pairs of drivers made their way toward a platform and shook hands with some of their biggest fans. After the song concluded, drivers climbed into the back end of new pickup trucks and rode around the track. It was such a strange feeling to be within 20 feet of those famous drivers that my dad had watched on TV for so many years. I, like many others, was especially excited to see Danica Patrick in the mix. Yes, the fact that she’s a woman driver has been overdone in conversation, but she’s making history. When dealing with cars I have learned to put in gas, fill the power steering fluid and check my oil. That’s it. So for me to see a woman on the track who knows what she’s talking about is inspiring.

As far as the other drivers, the fans sure weren’t scared to express their feelings.

Loud cheering and booing took place as the drivers made their entrances, as cars crashed and as drivers led the race. I know that’s our culture, and it doesn’t seem like a bad idea when watching on TV, but it was kind of strange watching that go on while I could see the driver in person experiencing it. I felt like Kyle Busch, especially, needed a bear hug.

Anyway, back to the light at the end of the tunnel. The moment I figured out I really liked NASCAR was when the cars were fired up and racing. We were fortunate enough to watch a pit stop from inside the pits and stand where the cars are pushed on and off of the track. The atmosphere just sucked me in. The sound and feeling of cars flying by at speeds of nearly 200 mph in a big blur was way better than seeing them crawl by on a TV set.

The pit stops look fast on TV, but when you’re actually standing behind it, it’s even more amazing. I also found it funny how the gas cans were filled. After each pit stop, two 11-gallon gas cans were put on a cart and wheeled out of the pits to be refilled. At times there was a line of crew members waiting to fuel up, and it just was unusual to me to see people waiting instead of cars.

If you are a NASCAR fan, or even if you’re not, I would highly suggest going to a race in person before you make any judgments. 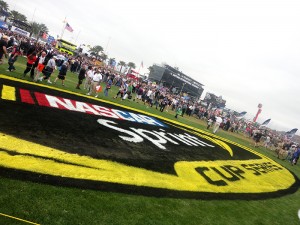 The Sprint Cup logo was roped off and guarded by personnel so it wouldn’t get ruined before the start of the Daytona 500 on Feb. 24. –Brandi Hagen/Albert Lea Tribune

It was a rush to be there, and it was even better that the NASCAR people we were surrounded by were very kind. There were many times we thought we were in the way, but we were never yelled at, only asked to move aside.

Brandi Hagen is the community editor for the Albert Lea Tribune.