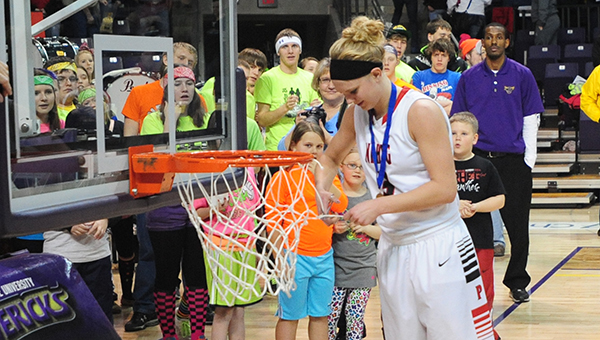 Carlie Wagner of New Richland-Hartland-Ellendale-Geneva cuts the net Friday after leading the Panthers past St. Peter in the sectional final. Wagner earned 49 points in the win. –Micah Bader/Albert Lea Tribune

NEW RICHLAND — The Wagner sisters have been instrumental in the success of the New Richland-Hartland-Ellendale-Geneva High School girls’ basketball team, a group that won 30 games and lost only once this year.

But winning wasn’t always the case for Carlie, Maddie and Marnie Wagner.

When they were little, the girls would play their toughest opponents: their older brothers. Alex is 24, and Danny is 22.

“Their job was to put the ball back in our faces,” Carlie said. “They’d never let us win.” 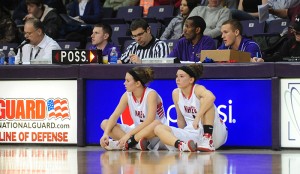 Maddie, left, and Marnie Wagner wait for the referees to signal them into the game during the sectional final against St. Peter.

Jane Wagner, their mother, would watch from a lawn chair to make sure no one got hurt.

“It would be the two big boys and the little girls, and the boys wouldn’t cut them any slack,” Jane said. “If they wanted to play, they had to step it up, or they were going to get hurt or beat, and they don’t like to get beat.”

These days, things have changed. The ball rarely gets rejected back into the face of a Wagner girl, even though the sisters are playing against older competition: Carlie is a junior and the twins are only in eighth grade.

Alex and Danny can be found in the stands at all of their sisters’ games.

“The boys are their biggest fans,” Jane said. “They’ll go to work at 4 in the morning to get off in time to make the games.”

Just like Alex and Danny pushed their sisters to get better when they were little, Carlie doesn’t sugarcoat anything with the twins, Maddie said.

“Carlie gets on Marnie and me a lot,” she said. “We’re always pretty good on the court, but if we make a mistake, we always hear about it. She’ll let us know.”

“… in a constructive way,” Carlie added with a laugh.

When they’re out on the court, the sisters can anticipate each other’s moves.

“We can read each other easily,” Carlie said. “When you’re a family, you just know each other better.”

Among many Divison I offers, Carlie verbally committed to the University of Minnesota earlier this season, because she said it was a good fit.

“It’s close to home, which was big for me,” she said. “You know, every little Minnesota girl wants to be a Gopher growing up. The coaches are awesome, and I Iove the players coming in.”

Wednesday’s state quarterfinal game was extra special to Carlie — because it was played in Williams Arena — the home of the Gophers.

In the state semifinals, the Panthers will play Minneapolis Washburn at the Target Center at 8 p.m. Friday.