Dozens of vehicles go in I-35 ditches 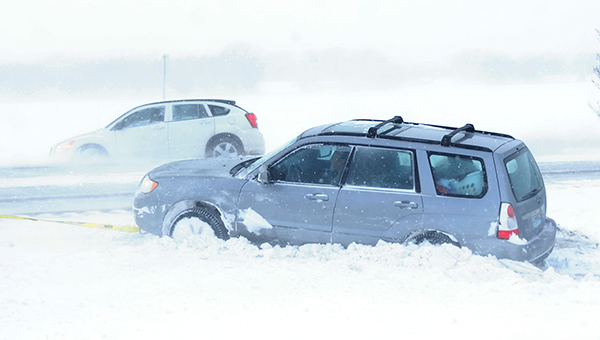 Several cars were in the ditches and median of Interstate 35 near Clarks Grove Monday afternoon. –Brandi Hagen/Albert Lea Tribune

CLARKS GROVE — About a dozen automobiles were in the ditch of Interstate 35 between Albert Lea and Clarks Grove near 5 p.m. Monday as motorists made their way through blizzard conditions. 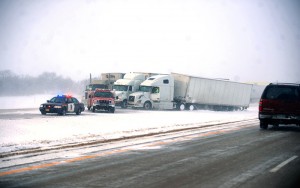 Two semis sit in the median of Interstate 35 near Exit 18 while another semi tries to pass Monday, March 18, 2013. Dozens of vehicles were in the ditch or median between Albert Lea and Clarks Grove after 5 p.m. — Brandi Hagen/Albert Lea Tribune

And that was just what two Albert Lea Tribune journalists noticed on a drive shortly after 5 o’clock. Another half dozen were north of Clarks Grove, including a jackknifed semi on southbound I-35, according to state traffic reports.

As tow truck operators were pulling cars out of the ditches, many more kept going in, according to police scanners. It became difficult to keep track of ditched vehicles, but the tally clearly was over two dozen.

Many of the cars and trucks were concentrated south of the Clarks Grove exit at mile 18 in the southbound lanes. First responders and tow trucks were working to remove the vehicles from the snow-filled ditches. The southbound ramp of the Clarks Grove exit was blocked at 5 p.m., and a state trooper farther up I-35 advised motorists to exit the roadway. Authorities re-opened the ramp at 6 p.m. 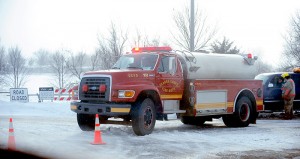 The vehicles varied in size and shape from compact cars to big rigs. Snowplow operators were sanding and salting roads. Most drivers were crawling along at 20 to 30 mph, but some were sailing along at twice the speed. Gusts of west wind occasionally pushed cars eastward on the icy roads.

Driving outside of cities is not advised as blizzard conditions are causing problems for motorists on highways and roads in the Albert Lea area. A few more spinouts happened south of Albert Lea on I-35, and another happened on I-90 north of the city, according to state traffic reports.

It was unclear whether there were any injuries Monday evening. Early reports didn’t indicate any, but there were a few rollovers, which are more likely to produce injuries than spinouts. The frequency of cars finding ditches seemed to decline after 6:15 p.m.

The National Weather Service says the blizzard and its powerful winds will continue to blow through the Albert Lea area into the evening hours. White-out conditions have sent cars and trucks into ditches, and visibility will be worse after sundown.

Winds are forecast to gust between 30 and 40 mph into the evening. Blowing and drifting snow will also occur across southern Minnesota. 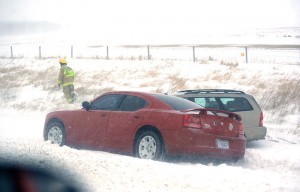 A firefighter checks on two vehicles that went into the northbound ditch on Interstate 35 Monday between Albert Lea and Clarks Grove. — Brandi Hagen/Albert Lea Tribune

The Minnesota Department of Transportation and the Minnesota State Patrol advised drivers to slow down along the Interstate 35 corridor in Freeborn, Steele and Rice counties because of scattered icy spots.

Visibility was greatly reduced throughout the region and motorists should beware of blowing and drifting snow, scattered slippery areas and compacted snow on roadways.

MnDOT snow plow operators are doing their part to make highways safe. Crews anticipate conditions will improve during the day. Motorists should remember to: