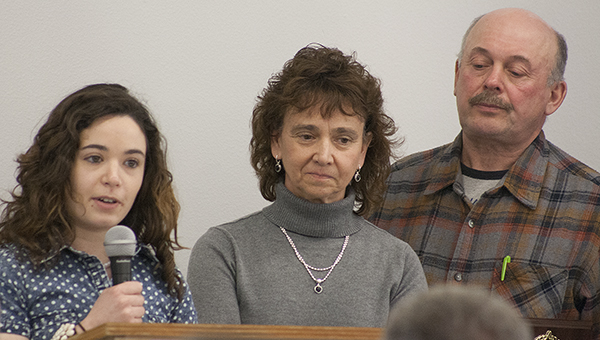 Lindsey Miller, left, speaks on behalf of her family to accept the award as Freeborn County Farm Family of the Year Tuesday at the Albert Lea-Freeborn County Chamber of Commerce Agricultural Luncheon. Standing next to her are her parents, Alana and John Miller. Not pictured is Dick Miller. — Sarah Stultz/Albert Lea Tribune

The comments came at the annual Albert Lea-Freeborn County Chamber of Commerce Agriculture Luncheon, which took place at the Fairlane Building at the Freeborn County Fairgrounds.

Speaking in front of a crowd of at least 125 people, Dan Hoffman, the 2012 Farm Bureau Ag Communicator of the Year, shared personal stories of farming and asked people to recognize the importance of agriculture.

Hoffman is the executive director of the Minnesota Agriculture and Rural Leadership program, which aims to develop skills of agriculture and rural leaders. Prior to that he worked as an educator for 30 years. He has also been the host on KSMQ’s “Farm Connection” television series for the past five seasons. 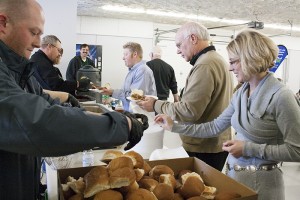 People line up to get a plate of food during the Albert Lea-Freeborn County Chamber of Commerce Agriculture Luncheon Tuesday.

Hoffman said agriculture is the lifeblood of Albert Lea, Freeborn County, the state and the nation.

It was the eighth year for the agriculture luncheon. It is one of three major agriculture events sponsored by the chamber each year.

In addition to the luncheon, there are the third-grade farm tours annually for about 500 local children and the 4-H market livestock auction.

“Everybody goes to the grocery store,” Kehr said.

People in attendance at the luncheon also recognized John and Dick Miller, of Oakland, as the Farm Family of the Year, along with John’s wife, Alana, and his daughter, Lindsey. Their son, Jack, was unable to attend but is active in the family’s farm. 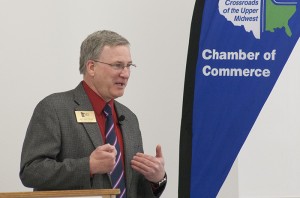 John and Dick, who are brothers, have run a dairy operation since 1979.

Kehr said the award is a recognition of a family’s long-term commitment to farming in the community.

Each year, the chamber’s agriculture committee accepts nominations for the award, reviews the applications and then chooses a winner.

The Millers will have a chance to compete for state Farm Family of the Year Aug. 8.