Albert Lea names its 2013 Teacher of the Year 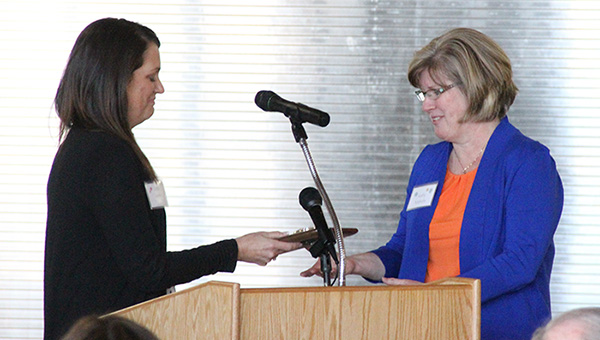 After 57 nominations and six finalists, Albert Lea announced its 2013 Teacher of the Year at a ceremony Wednesday at Albert Lea High School.

Kathy Niebuhr was named the Teacher of the Year at a ceremony surrounded by her family and colleagues. Niebuhr is the library media specialist for the elementary level in the entire district. Her responsibilities include providing technology support and integrating new technology like iPods, iPads and Smart Boards into the classroom.

“I know how important that classroom teacher is, and I’m honored to support their work,” Niebuhr said.

She also said she’s glad the district and community both support new technology in the schools. After she accepted the award she told the crowd that she enjoys her job. She also spoke about helping each of the other five finalists, Terry Gjersvik, Jacque Sorensen, Lisa Haney, Brenda Nelson and Beth Nelson, integrate technology into their classrooms.

“I have the greatest job in the district,” Niebuhr said.

The district’s 2011 Teacher of the Year, Peggy Bennett, welcomed the audience and introduced the other speakers.

Superintendent Mike Funk said he was proud of all the finalists and congratulated Beth Nelson who was a former student of his. He commended the Teacher of the Year committee for their work in choosing finalists each year, and credited the finalists for helping students succeed.

“Our challenge going forward is to ensure we’re meeting the needs of our students,” Funk said.

Al Helgerson, president of Albert Lea’s teachers union the Albert Lea Education Association, said there were 57 nominations for Teacher of the Year and commended the six finalists.

“On behalf of the ALEA, we’re very proud of all the finalists — you guys do a great job,” Helgerson said.

The district’s 2012 Teacher of the Year Kathie Lein also spoke at Wednesday’s event that was held in the commons of Albert Lea High School.

“I consider myself lucky to be a teacher,” Lein said. “Teaching is about never, ever, ever giving up.” 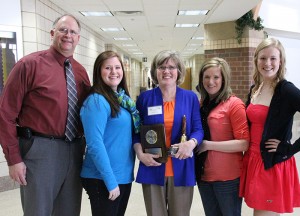 Kathy Niebuhr, center, poses with her husband, Brad, and daughters Beth, Chelsey and Sarah. Niebuhr was named the 2013 Teacher of the Year at a ceremony Wednesday. — Kelli Lageson/Albert Lea Tribune

School board Chairwoman Linda Laurie presented Niebuhr with the award after all six finalists introduced their families. Niebuhr was also presented with an award from the Albert Lea-Freeborn County Chamber of Commerce. Committee member Nancy Vanderwaerdt presented that award.

She was the winner of the Sallie Mae First Year Teacher award, has been nominated for the Teacher of the Year award before and was the recipient of an Education Minnesota Foundation grant.

A native of St. Paul, she and her husband of 25 years, Brad, have three daughters, Beth, Chelsey and Sarah.

She said her professional goal is to instill that same pride and sense that hard work is rewarded in many different ways in the children they are entrusted with every day at school and beyond.